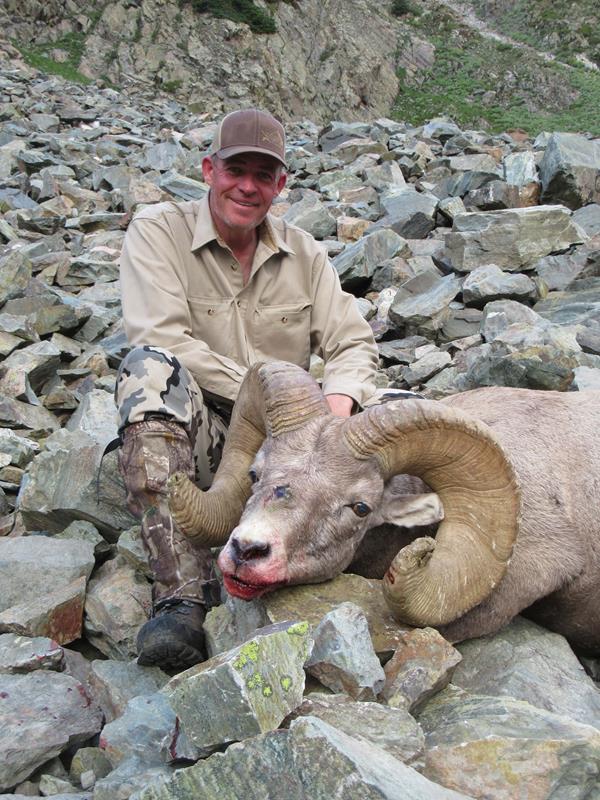 It was a very exciting day in early July when I received a phone call from Bryan Bartlett of the New Mexico Wild Sheep Foundation. He informed me that I was the lucky winner of the Rocky Mountain bighorn raffle tag. There were only about three weeks until the start of the season, so there wasn’t any time to waste.

The second call I received was from Kerrie with the New Mexico Outfitters Association, offering me congratulations and a list of approved outfitters. That call started the process of choosing an outfitter. I also talked to Huntin’ Fool to give them a huge thank you for purchasing my winning ticket and to get any advice they had to give. I talked to a few of the local outfitters and my friend, Bryan Martin, who has a vast knowledge of sheep hunting. He has hunted many areas and knows tons of people in the industry.

As the raffle tag winner, I had to choose one zone to hunt, which meant that some pre-scouting would be very important. It didn’t take me very long to decide to get the help of Bill Lewellen of One on One Adventures. Bill and his team spent the next few weeks looking for rams in three different zones. It was a tough decision on where to hunt as New Mexico has done an amazing job of managing their sheep populations and there are awesome bighorn numbers. There were many rams in every zone we covered. After Bill spent many hours glassing and I made a few calls to Biologist Eric Rominger, who knows the area and sheep better than anyone, we chose to hunt Wheeler Peak.

My friend, Scott Carter, and I headed south from Canada on July 29th to get ready and be in place for opening day. We landed in Albuquerque, and after picking up my license in Santa Fe, we were off to Taos Ski Valley. My rife permit didn’t arrive until I was already across the border, so that meant borrowing a rife from Justin, one of Bill’s helpers. We met up with Bill and his helpers and made plans for the next day.

After a night in a first-class ski lodge, we got an early start the next morning. The operators of the ski hill were very helpful and gave us access to their roads up the mountain. We travelled to near the tree line, parked the vehicles, and continued on with horses to where we planned to make camp. We hadn’t even made it to our campsite when we started seeing sheep, mostly rams. After setting up camp and taking care of the horses, we hiked further up the mountain to glass for sheep. The area was beautiful with a lot of trees and meadows. There was an abundance of feed for the sheep and mule deer that called the basins home. The area reminded me a lot of the Rocky Mountains in Alberta and British Columbia, except the elevation was twice as high. That first day, we looked over many sheep but didn’t see exactly what I was looking for. We glassed a large portion of the area and then made it back to camp in the dark.

The next morning, we were up early and headed out with our backpacks before the sun was up. We hadn’t gone far when we were looking at a new group of rams with several dandy high 170" types. I chose not to take an old warrior of a ram that would measure well into the 180s and had huge chips broken out of his horns. I think my outfitter thought I had lost my mind turning down that impressive ram. It seemed like everywhere we looked there were small bunches of ewes and lambs as well as many rams.

Around midafternoon of the second day, we spotted the ram I had been waiting for. He was bedded in an inaccessible spot with three other big rams in some cliffs. We spent the next four hours waiting, watching, and sunburning. Towards the evening, the rams moved to a different spot where we were able to get in position above them. My borrowed .300 WSM worked great, and after one shot from a tricky perch in the rocks, an awesome 11-year-old ram was down. He was definitely a trophy-of-a-lifetime.

After pictures and butchering the ram in a rain and lightning storm, we loaded him into our packs and headed down the mountain. The parking lot was downhill and closer than our camp, so we chose that route. Luckily, we met up with resident Kerry who helped pack the ram and invited us to stay the night in his condo.

All in all, we had a great time in New Mexico. The available sheep were outstanding, and all of the people we met were very friendly and helpful. We stopped in Santa Fe the next day to have the ram registered and measured, and we were congratulated by many people at the Game and Fish ofce. We headed back to Canada with my ram and many good memories.

Thank you to everyone involved!