My Trip to South Africa 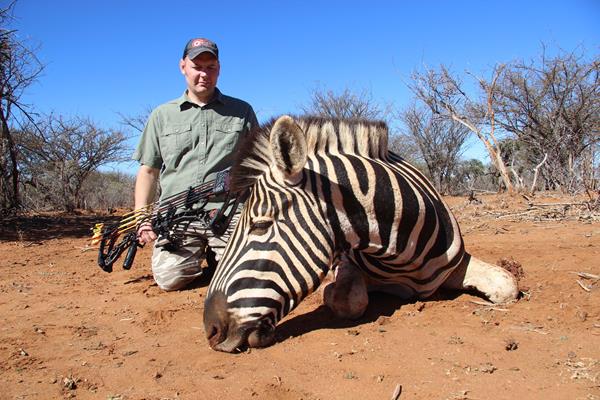 My trip to South Africa started as a dream 25 years ago when I was a young teenager. As the years flew by, I was not sure if I would ever get the chance to travel around the world and hunt the animals I had dreamed about. I made a list of animals I would want to hunt if I ever got the chance to go. At the top of that list was the kudu bull, one of the most beautiful animals in Africa.

In March of 2014, my girlfriend and I went to a wild game dinner, not planning on buying any hunts, but by the end of the night, we were going to South Africa. We only had a few months to get ready for the hunt I had been dreaming about for decades. We immediately started planning. I got our archery equipment ready for bigger game than what we hunt here in the Midwest. I bought every Africa bowhunting DVD I could find, and we started learning the anatomy of the animals that were on our list. I was going for the kudu bull, gemsbok, and a blue wildebeest. Sarah was going for an impala and a warthog. With only a couple months to go, I decided what better place to propose than a hunting trip-of-a-lifetime around the world.

With only a 16-hour flight away, we could not have been any more excited. When you land in Johannesburg and drive to the lodge, the first thing you notice is the air has a unique smell, the sound of the birds is different, and seeing a warthog cross the road in front of the vehicle puts a smile on your face. Immediately after getting to the lodge, our professional hunter (PH) Chris told us to shoot our bows to make sure the sights were still good after that long flight and then we headed out hunting. That first night, I was fortunate to shoot a beautiful blue wildebeest.

Over the next few days, we saw hundreds of animals come to the water to get a drink. Sarah shot a nice impala, and I got a gemsbok but still no shooter kudu. On the third day, I decided now was the time to propose. I told our PH Chris that I was going to propose and that I needed him to take pictures at lunch. I think he was more nervous than I was. While Sarah went to wash up, I put the ring on her arrow rest, and when she came back, I said we should grab our bows and have Chris take some pictures of us. As I handed her the bow, she saw the ring. It was great as Chris was able to get some good pictures of the special moment. And she said yes! After the pictures were all taken, we headed right back out to the blind.

On the last day of the hunt, Sarah shot a great warthog. It definitely was a hunt-of-a-lifetime from seeing animals like giraffes to monkeys and some of the most beautiful birds we have ever seen. Before we left the lodge to start the trip home, I had decided that we were coming back in two years for the kudu bull that had eluded me all week. I guess that’s why they call them the grey ghost.

Sarah and I got married, and before we knew it, it was time to start getting ready for the 2016 trip. Chris, the head PH, knew how important the kudu was to me, so he had multiple trail cameras up and was sending pictures to me a month out. Talk about being excited! I think I looked at those pictures every day leading up to the hunt. This trip, Sarah would be hunting for a gemsbok and I would be going for the kudu. This time, our PH would be Francois. He is also a diehard bowhunter.

As soon as we got to the lodge, we shot our bows and went right out to where the shooter kudus had been coming into the water. We sat until dark but no kudus. Day two was windy, but we went right back to the same spot, and sure enough, here came the kudu bulls and cows. As they closed the distance, the wind picked up and the side of the blind made a flapping noise. A cow barked, and the hunt was over that fast as they all ran off.

The next day, we saw hundreds of animals and Sarah shot a great gemsbok. On the fourth day, the kudu bulls came to the water and the one we had been waiting for walked up broadside at 25 yards. My release was clipped on, and I was just waiting for Francois to give the go ahead. I was getting more excited by the second.

I was still waiting when Francois said, “We’re going to pass on this bull.”

He said again, “We’re going to pass on this bull. Now that I have seen this bull, I think we should hunt the other blind. I think the other bull coming in is a better looking bull. He is wider at his first curl and his tips point out more.”

Needless to say, my heart sank. However, I listened to our PH and we watched the kudus walk off. When we got back to the lodge that night, we stood around the fire, telling all the hunting stories from that day. I think everyone thought we had lost our minds for passing that bull. I just kept hoping that Francois knew what he was doing. The weather over the next couple days was so windy that we barely saw anything.

With only a couple days to go, I was starting to get a little worried. With the weather still not great, windy and overcast, we went to the blind even earlier than we had the previous mornings.

The three of us just sat and waited, and then Francois said, “Here they come, and your shooter bull is with the group of kudus.”

My heart started pounding immediately and I hadn’t even seen them yet. Francois whispered to me to stand up and get ready and the bull I wanted was the one to the back. The bull we had been after for days was finally coming in, and I could not have been more excited. He was standing at 32 yards broadside. I drew my bow back, put my sight pin right where I wanted it, and released the arrow. It hit him right at the back of the front shoulder. He made it out of sight, so we gave him some time and then we started the track and he did not go far. I was so pumped up. After two trips to South Africa, I had finally got the African animal I had wanted for decades. We took a lot of pictures, and I could not wait to get back to the lodge to tell everyone. I was so excited to get the kudu mount back.