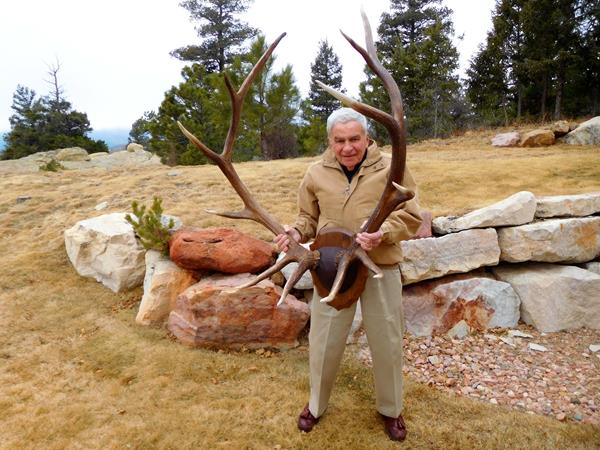 “Oh, no!” I exclaimed. The unthinkable had happened.  Let’s go back and build this story from the start.

In the 1980s, I met a very gracious family who allowed me to deer hunt on their property. Their ranch was located on the Eastern Plains of Colorado. Over the ensuing years, I was fortunate to kill a couple of nice deer. These were all self-guided hunts on private property. Due to a busy life, including family and business commitments, I was unable to deer hunt there for about the next 20 years. Fortunately, I became reacquainted with the ranch 10 years ago. They suggested I start hunting there again, only this time I would be hunting elk. The deer population had dwindled, and occasional elk were appearing. No one had ever shot an elk on this property.

We all know that elk were a plains animal and were driven into the mountains many, many years ago due to demand and unregulated hunting by the early settlers and also commercial enterprises. Due to advances in game management and continuing efforts by various organizations, including state wildlife agencies, RMEF, and hunter groups, elk have made a dramatic comeback, especially on the plains of Colorado. Most of this area is private property, and other than with an outfitter, it is difficult to obtain permission to hunt.

In the first few years I hunted, the elk sightings were minimal and usually no elk were seen. This is a small ranch compared to other elk properties; however, the scenery and other wildlife viewing, such as coyotes, antelope, and a mountain lion, rejuvenates the soul every time. Let me also state that I am an “experienced” elk hunter, continuing to learn more each time I hunt.

It was now the 2017 hunting season. Even though this area is sparsely treed, there is beauty in the wind-blown gamma grass, the gravity irrigated alfalfa and grain crops, and the sunrises and sunsets casting a golden glow over all of God’s terrain. My soul thrives on this. I looked at my watch, and it was 3:00 p.m. My eyes, tired of glassing, detected motion on the hillside beyond the meadow. The distance across the meadow was about half a mile before slowly blending into the ponderosa, pinyon, and scrub oak on the rocky hillside. My binoculars confirmed a cow elk. Further viewing revealed a few elk scattered among the trees. I was sitting in a depression on the ground on the edge of the meadow. About 30 elk proceeded cautiously into the meadow to feed and drink. Careful viewing revealed a good, mature bull at the back of the herd. I had time to determine distances, which was easy because there was only one tree. The distance was 160 yards.

This was the only mature bull I had seen in eight years of hunting this ranch. My anxiety level continued to rise. I asked myself, “Am I comfortable? Is my gun stable? Can I do this?’ No answers appeared in my brain. I told myself to keep focused and not let my attention stray. The bull was feeding in the small depression, and only the tip of the antlers were visible. I thought it was a 6-point.

Time passed - 30 minutes, 45 minutes, and then finally the bull began to walk towards the tree. I was seated with my bipod extended, and suddenly a severe case of “buck fever” began to develop. It had never before happened to this degree. I visualized his body through the continuously moving scope. I tried to calm down to shoot between the heartbeats and breathing, but it was not working well. I pulled the trigger on my .338 magnum and heard the hollow “thud” of the bullet hitting. The bull whirled, walked 20 yards to the high grass, and lay down. I could not see enough of his body for a second shot.

The herd left 20-30 minutes later, but the bull remained. I had to deliver the coup de grace. I steadily made my way closer in the open meadow, trying to remain out of the bull’s peripheral vision. Obtaining appropriate body visibility was a problem. In an instant, the bull was up and running into the pines. “Oh, no!” There was no chance for a second shot. Searching revealed no blood trail, and darkness crept in.

The wait until morning took an eternity! The rancher, his wife, and I spent the next many hours searching near and far, but with no results. Over the next few days, I continued to hunt and search the area. The rancher and his family endlessly looked on horseback but to no avail. Disheartened, I chided myself for not making a better shot. After many sleepless nights, I finally accepted that the bull was gone.

Three months later, the rancher called to tell me that he was out cutting wood on the hillside when his dog returned smelling very badly of decaying organic matter. He followed the dog back and discovered elk hair, some ribs, four legs, and the head and antlers. I described the antlers to him, and he confirmed that it was my elk.

After hard work by the taxidermist, I now have an antler mount of a beautiful, mature 6-point bull elk. Sometimes, in spite of human frailties, God smiles upon us.

I would like to thank the rancher and his wife for allowing me to hunt and my beautiful wife for tolerating my passion.