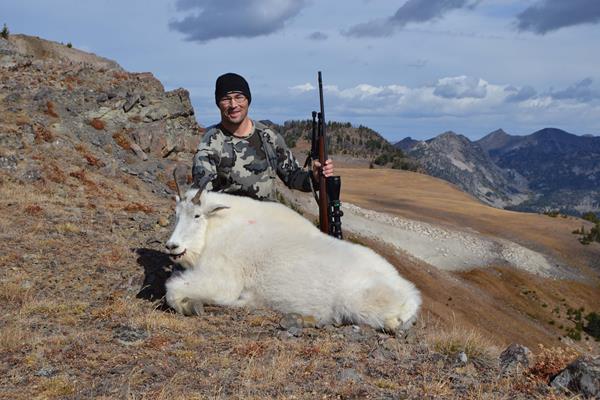 Going into the 2016 season, I still hadn’t put my tag on any western big game animal. I am from Texas and have hunted my entire life, but I had just gotten into western game animals three years prior. The first two years hunting backcountry mule deer in Wyoming and elk in Colorado were very good learning experiences for me, to say the least. Since I started applying for tags, I had been putting in for seven states every year for elk, mule deer, a few antelope, and a few mountain goats. This year, I was planning to hunt mule deer in Colorado and had scouted the entire unit the past spring. This plan took a huge step back when I got a letter in the mail from Montana stating that I had one week to accept my mountain goat tag or it was going to be given to the next person. I thought surely it was a prank because who draws a mountain goat tag on their third year? Sure enough, I logged on and saw “Successful!” I had never even bothered to check the outcome earlier in the year since I assumed I wouldn’t draw for 15 years, if ever, as a non-resident. Now I had a tag-of-a-lifetime with no plan, not ever seeing a mountain goat, and only six weeks until opening day! Being a fitness director and an obsessive year-round hunter/hiker, I stay in pretty good shape year-round. I remember the week before I got my tag telling a client of mine, who was going to British Columbia, to ALWAYS be in “sheep shape.” Sure enough, this was a prime example of why!

After making many calls to anyone who had information about the unit or wanted to tag along on this hunt, I finally decided on taking my wife, Kenisha. Most people would have gone with an outfitter in my situation, but I wanted to do this on my own. This was going to be a once-in-a-lifetime hunt, and I knew my wife would never understand the pure beauty if she wasn’t alongside me. This would also be a great way to spend time together in our hectic lives. Kenisha is an elementary school teacher who has the summers off. She has only gone with me on several scouting trips in the past seasons and had yet to stay in the woods for more than one consecutive night. This was definitely going to be a challenge that I thought I was up to.

As mid-September hit, I had trained hard, got gear put together for both of us, and was ready for the 24-hour drive to southern Montana. This trip started and ended up unlike my previous hunts in that every plan worked flawlessly. We hiked in seven miles and just happened to set up camp on a ridge that looked right into three basins that were full of goats. We had streams of water on both sides of our camp and bugling elk to serenade us in the evenings. This is what a premium tag is supposed to be like! The weather even cooperated, giving us plenty of sunshine for glassing and the occasional nap. On only the second day, I had goats at 520 yards in the scope but decided to pass due to where they were on the mountain and it had gotten late into the afternoon. At the end of that day, we went back to camp early to eat and rest up for the next day’s adventure. That night, I went to bed planning my approach on the goats.

It was about a two-mile hike to get around the north end of the cliffs the goats liked to hang out on, so the next day we ate our oatmeal and headed out early. On the way, I wanted to check out this basin that I thought just had to hold some goats. As we were looking into that basin, we spotted goats up above us on a steep ridge. We immediately hit the ground and started backtracking down the mountain to get out of their view. After shedding our gear, we began our final stalk up and over the crest of the mountain. At around 500 yards, the goats started walking down the ridgeline towards us and we started crawling towards them to close the distance. Over the next 10 minutes that seemed like eternity, I was repeatedly going through the motions of ranging, adjusting my turret, and checking my level on the scope. Finally, I ranged them at 162 yards and they were going to be too far under me if I didn’t shoot soon. I put my Kimber 270 turret on 150 yards, centered my crosshairs on the middle of the shoulder, and waited for the lead goat to clear the others. Just as I got a clear shot, I pulled the trigger and saw the goat drop in the scope. For the first time in six weeks, I finally relaxed. I was relieved and ecstatic at the same time. I had been worrying about so many what-ifs along the way that it was very hard to enjoy the hunt. Everyone kept telling me just to have fun, but there is just so much pressure involved that it really is hard to do.

After getting the goat skinned, quartered, and deboned, we headed the two miles back to camp to rest up for the brutal seven-mile hike out the next day. It’s almost surreal when you are hanging your mountain goat in a tree for the night. As most of this backcountry backpack hunting is, this hunt was definitely 80%-90% work and the rest fun. I wouldn’t trade it for anything in the world. We got a decent night's sleep other than my wife being scared to death of grizzly bears all night and nudging me every time she heard a noise every five minutes. The last day out was just as hard as it should have been with over 100 lbs. on my back. I’ve never had so many aches and pains, but at the same time, I was astonished at what we had accomplished.

This hunt had truly been an amazing experience that I got to fulfill with my wife by my side. Even though she might have slowed me down at times or made me worry about her own physical well being, I wouldn’t have wanted another hunting partner than her. As the years pass, I will always cherish the week we spent on top of the Montana mountains enjoying some of God's untouched creations and unforgettable vistas. I would like to thank everyone who watched our three young children while we were away, and I would also thank the crew at Huntin’ Fool for putting up with all of my questions regarding this hunt of five lifetimes. I’m feeling so lucky; I might even start applying for sheep!

Next, my wife and I went on our very first antelope hunt. Surprisingly, the hunt was way better than I had expected. I'm such a nice guy that I let my wife hunt antelope when I had never gone. With 450 tags, I figured I would be fighting the masses to get one shot. The night before opener, we arrived in Wyoming and scouted for a few hours. Right off the bat, I found a herd of 30 antelope. We bedded them down and went back to the truck.

The next morning, I glassed from the truck and found the entire herd again about one and a half miles away. We got our gear and headed towards them. Eventually, we got pinned down in the open prairie at 400 yards. My wife aimed my Kimber 270 and shot the biggest goat mid-body. The goat took off in a dead run right at us and stopped at 120 yards. After zooming out the scope and adjusting the turret, I got her on target and she dropped him in the chest. It was awesome!

Being from Texas, I like to think that I'm at a disadvantage to residents or closer states. I might have just gotten lucky on this trip or I might actually be figuring the public hunting thing out! I used a few tips that the Huntin' Fool Professional Hunt Advisors always talk about and I think it paid off. I think these factors and a few others allowed my wife and me to have a very enjoyable hunt on a unit that only requires one point to draw. Thanks again to everyone from Huntin’ Fool. I have learned a lot so far!