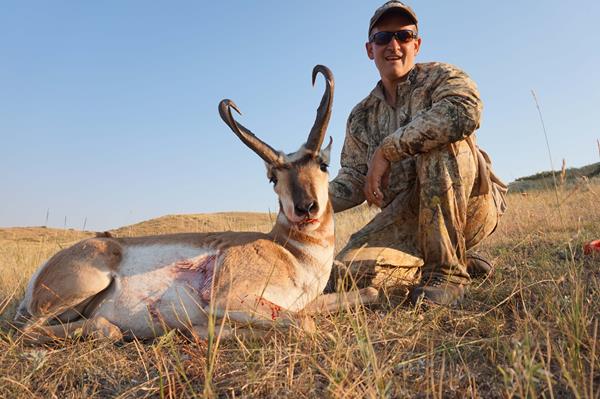 It is hard to think about antelope hunting when there is three feet of snow on the ground, but as my dad and I sat comfortably in front of the wood stove full of flaming juniper, that is exactly what we did. I had just seen an Internet post by Brad Vargo for 2017 antelope hunts on the Crow Reservation in Montana. The price was quite reasonable, and it appeared that this hunting opportunity was new as this would only be the second year of operation on a reservation that encompasses over two million acres.

I usually figure that by the time I see something on the Internet it is booked or sold. With some hesitancy, I emailed Brad, and to my amazement, he called me within 30 minutes. After some explanation of the hunt, the guides, and expected opportunities, we signed up for an August hunt. As the hunt approached, we started to make travel plans. Coming from eastern Oregon, we would have to drive 850 miles, which was no real problem. Unfortunately, we were scheduled for August 18-20 and we would be driving home on August 21st. Our route would take us directly through the Totality of the Eclipse and the traffic apocalypse that was anticipated on this route. We threw an over the cab canopy on my father’s Duramax and figured we would just pull over and sleep if the traffic became too much to manage.

We rolled out two days early, and to our surprise, there was not much difficulty maintaining highway speed all the way to Hardin. In fact, we arrived half a day early. With some time to kill, we decided to visit the Little Bighorn Battlefield. What we thought would be 30 minutes to take pictures turned into four hours of movies, lectures, and museum exploration that was both amazing and somber. We then traveled to St. Xavier where a small, comfortable lodge was our home base and we met Chaz Bends, our native guide.

We spent the next couple of days traversing the reservation and spotting the herds, making stalks, and grading potential bucks. It was clear that the monster bucks were hanging out on their own, but a lot of mature and representative bucks were there for the taking. The year before, the biggest bucks seemed to be taken closer to the rut, and given our timing, we decided we wanted to take a nice big-bodied antelope that would fill space in the freezer and hopefully have a nice rack, if not Boone and Crockett.

After the first day of hunting, we were invited to Crow Fair, which is a Crow gathering that occurs for a week once a year that just happened to coincide with our trip. We went with Chaz and met his beautiful and gracious family - his wife, Jade, daughter, Bailey, and son, Timber, as well as multiple members of their family and clan. To see hundreds of full-size tipis pitched on the open ground was a sight to behold and we learned a tremendous amount about the Crow culture.

My father and I were able to take our bucks after two days of hunting. I had a wonderful opportunity for a “speed hunt,” covering a little over a mile as fast as we could fjord a creek, break through some muddy surrounding basin, and climb a coulee to get positioned perfectly across from a feeding buck at 185 yards.

The next day, we put about a 3/4 mile stalk on my father's buck, and after shooting 200 yards from sticks, we had to follow up a low shoulder shot for about three miles in 90 degree heat before finally getting in close for a finish-up shot. Both hunts were challenging and made for exciting memories. Butchering the antelope days later, we found we had harvested mild fat beautiful bucks that should provide nice winter table fare.

As we packed to leave, we decided eclipse be damned we would enjoy our trip home. We drove south through the Beartooth Mountain Pass, seeing rugged and wild country that climbs to 10,947 feet. We utilized several large pull-outs to bring out the spotting scope, watching bighorn sheep and other wildlife before dropping down into the North Yellowstone entrance. While the traffic in Yellowstone was thick, it was probably no worse than any other summer day in the park. Watching bison, antelope, and elk meander next to the road made the traffic tolerable. We finished with the quintessential stop at Old Faithful, and after it erupted, we made our way out of the park.

We drove that night to just east of Boise, watching people fill up hayfields in the path of totality that advertised camping for $300 per night. After sleeping a couple hours at a rest area, we made it home 30 minutes before the start of the eclipse. We unloaded our gear and sat on the porch with my kids, watching the moon consume the sun through our cardboard viewing glasses, and we went to cutting up meat.

I have written about and published stories about hunts before, but never have I written so little about the actual hunt. It reminds me that we hunt not just to take a trophy animal but because of what hunting means to us and our families. My father and I had the opportunity to meet wonderful people with similar values and desires, despite our different cultures and customs. We saw some of the best scenery and wildlife that our great country has to offer, and we were able to see the spectacle that was the 2017 Eclipse mania.

I have always believed that the best way to take great game regularly is to find an area and hunt it year after year, becoming an expert in that unit. However, what I have chosen to do more often than not is pick new places, meet new people, and road trip with my hunting partner (my father). It has never put a record book animal on my wall, but it has done more to enlarge our experience and open our minds than staying at “deer camp” year after year.