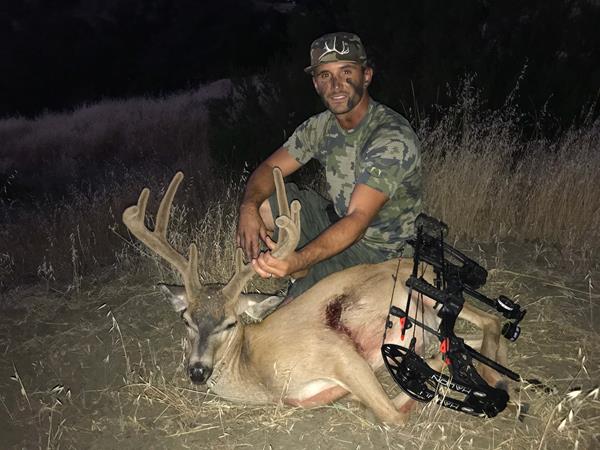 The Columbia blacktail deer may be one of the most overlooked big game species in North America. With their small racks, they don’t get the attention that both mule deer and whitetail do. If you don’t live in blacktail country on the West Coast, there is a good chance that you have never hunted them. Recently, deer hunters have become more like collectors and we have been taking a lot of calls from hunters who want to complete their deer slam. The deer slam consists of taking all of the five deer species recognized by the Boone and Crockett Club. Those deer species include mule, whitetail, Coues, Columbia blacktail, and Sitka blacktail. I feel that Columbia blacktail is the most difficult of the deer species to harvest a mature buck on public land.

I am like a lot of hunters out there as I have always wanted to complete my deer slam. At this point in my hunting career, I have harvested all of the deer species except a Columbia blacktail. My wife, Amy, and I have hunted them a couple of times in Oregon, but we have not brought one home yet. Amy was the first one in the family to hunt blacktail in Oregon as she drew the 100M muzzleloader tag that allowed her to hunt the rut in November. Going into the hunt, I did not know what to expect, but I had a good friend who lived in the area and offered to show us around. Oregon has very strict muzzleloader rules where the ignition system must be exposed to the elements. This turned out to be the toughest part of her hunt as it was next to impossible to keep the powder dry on her muzzleloader with all of the rain. We stalked a number of good bucks that were rutting does, but Amy was unable to connect as she would have the cap go off but not the powder or a hang fire. If we could have taken away the constant rain and the blackberry bushes that shredded our raingear, we would have had a great hunt. My hat is off to the guys who hunt blacktails in that jungle country as it is a learned art.

My two blacktail hunts have been archery and have taken place in Oregon. On both of those hunts, I had opportunities to harvest smaller bucks, but I passed, hoping for something better to turn up.

Blacktail deer live on the West Coast and extend up into Canada. If you are concerned about killing a true Columbia blacktail deer, you should refer to the Boone and Crockett website at www.boone-crockett.org/bgRecords/ records_boundaries.asp. For this article, I am going to focus on California and Oregon as those are the two states that offer over-the-counter tags, have long seasons, and offer a good hunt for anyone who is looking to add a blacktail to their trophy room.

Oregon is most likely the state where my family and I will take our Columbia blacktail deer as we buy a hunting license there every year as we apply for tags. I really like all of the opportunity Oregon provides for hunting blacktail deer. A number of areas have both an early and a late archery season. This is the hunt I take advantage of as once you purchase a general archery deer tag you can hunt any general deer units that are open in the state. This tag gives a hunter the chance to hunt Columbia blacktail, mule deer, or whitetail. The general archery season usually runs from the last week of August through the last week of September. Normally, I hunt mule deer in the desert of southeast Oregon, and then if I am unsuccessful, I hunt one of the areas that offers the late rut dates for Columbia blacktail on the western side of the state. Two of the units I focus on in the late hunts are Rouge and Evans Creek. The late archery dates for those two units in 2018 were November 10-December 2. The western general rifle season deer tag is valid in most units from the end of September until the beginning of November. This season may see a little pre-rut action, but don’t expect a rut hunt.

A big thing to remember about hunting Oregon for blacktail is that they live in thick, steep country. A lot of land on the west side is made up of either public land or large timber company properties. A lot of the timber company lands will allow access as long as the fire danger is not high. Some of them charge a fee, while others are free. There are a lot of gated roads to hike in on, but a good mountain bike can really help you cover country. A good tactic is to glass clearcuts and burns. Blacktail are more like whitetail and can have a very small home range. Another tactic that is used in Oregon is baiting deer. Oregon, like Utah, allows a hunter to hunt over bait. This tactic has been responsible for a lot of big bucks hitting the ground. Hunters have the best luck baiting early in the season when the bucks are still in velvet.

Every year, some of the first deer pictures to hit social media come from the archery deer hunters hunting California’s blacktail deer units. They have the earliest season opening date in the West with the A zone opening in the middle of July and the rifle season opening in the middle of August. The B zone is hands down the best zone in the state for blacktail deer hunting. This zone borders Oregon’s better units. The archery season in the B zone typically opens in the middle of August, but area B4 opens at the end of July. The rifle season opens in the middle of September, but area B4 opens earlier at the end of August. The B zone has a lot of public land and is very similar to the country in southeast Oregon.

California offers plenty of good public land areas where if a hunter is willing to put in the time he should have an opportunity to harvest a buck. California has some world-class blacktail hunting on a number of large private ranches in the northwest portion of the state.