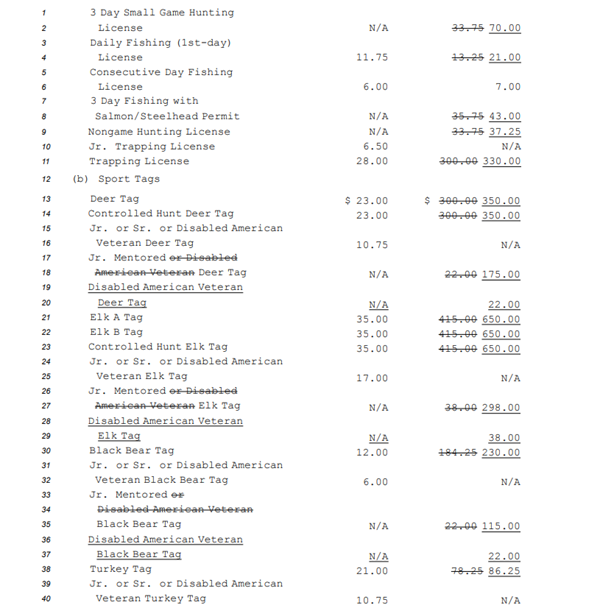 As we roll into a new year and go back to the drawing board for applications, I can’t help but look around at most of the western states and their Game and Fish agencies and wonder how the hell they still have a job! Unquestionably, big game populations across the west are shrinking, and most Game and Fish agencies either have their hands tied by federal government overreach or take the more popular approach of blaming the dwindling populations on weather/climate changes. Seeing how this is a Soapbox and an opinion piece, I’ll give you mine about greedy state legislatures and state Game and Fish agencies’ head-scratching remedies to dwindling big game populations.

Now let’s assume that some of these states out west acknowledge they have a problem and want it to appear as though they are concerned. These states have tried habitat projects, highway crossings, lower hunting permits, water developments, etc., which have slowed the decline and helped the problem, but it hasn’t fixed it by a long shot. Just once, I would like to see one of these agencies grow a set and really put an effort into reducing the predator population across the board for five years and see if that works. I mean really reduce it to a number that can allow ungulate populations to rebound and grow, not just maintain. We have tried everything else at this point, and nothing has worked yet, but I digress. The biggest problem with most Game and Fish agencies is that they are willing to accept that big game populations will just continue to shrink and they can’t (won’t) do anything to fix it.

This last year, we saw multiple states attack non-resident hunting opportunities to try and reduce the number of us in their state and/or increase non-resident fees. That is a fact, but it is a fact none of us should be OK with. The main reason there has been such an attack on non-resident hunters is that residents are frustrated with fewer opportunities to hunt and worsening hunting conditions when they get the chance to go. First, this comes back to poor management of the Game and Fish agency to maintain big game populations at the highest threshold for the available habitat instead of the lowest. Second, there is little to no accountability for poor management, and we keep the same people in place who have shown that they are inadequate to manage big game. Third, there is little to no non- resident representation at these meetings, and state legislators who are bringing forth these bills and legislation have little interest in non-resident impacts. They only care about getting elected, and residents are the ones they need to placate to.

In the grand scheme of things, I guess this is more of a rant piece. However, I would like it to be a wakeup call to all non-resident and resident hunters to band together and realize that further limiting or taxing the minority hunting group is not going to fix the real problem with big game herds out west. It is a bandage covering a gaping wound that will eventually soak through, and if the real problem is left untreated, it will bleed out and none of us will be hunting. We need to do a better job as hunters (me included) to work together and hold our state Game and Fish agencies accountable for allowing the populations to dwindle to the point that we are now all fighting over the scraps.

Huntin’ Fool will always fight for non- resident hunting rights, and we will strive to do a better job in having representation at local Game and Fish commission meetings in hopes of keeping the real issues at the forefront instead of continuing this dog and pony show of pitting resident hunters against non-resident hunters in an attempt to deflect the blame.

I could go on and on, but I want to end on a positive note. Despite all the issues affecting hunting opportunities now versus 20-30 years ago, there are still tons of great opportunities out there if you are willing to put in the work and enjoy your time in the outdoors. Check out the Huntin’ Fool Year in Review article and you’ll realize that most of the hunts our staff went on were in easy-to-draw or general units or on leftover tags, along with a few crazy lucky draws thrown in the mix. Remember, we are always here to help you with your application strategy, and we will be here to help protect, enhance, and inform you of your hunting opportunities across the west.