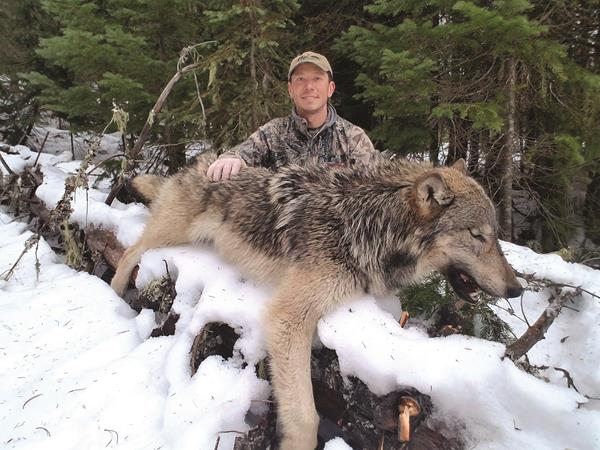 The mission of the Foundation for Wildlife Management is “to promote ungulate population recovery in areas negatively impacted by wolves, assist State Game Management Agencies in meeting their wolf management objectives, promote youth in the outdoors, and to educate the general public on the negative impact the successful reintroduction of wolves has had on our ungulate populations.”

It is important to recognize the difference between “Preservation,” meaning no use at all, and “Conservation,” meaning wise use without abuse. Each approach is productive and valuable in its own way. In instances where a species is truly at risk of extinction, Preservation plays a critical role. However, once a population has reached a manageable level, in most cases, Conservation is the appropriate management approach as it creates balance and promotes maximized wildlife populations. Preservationists often state that man should allow nature to “balance itself,” which implies two things. First, that man is not a part of nature or the ecosystem we live in and manage, and second, that allowing nature to balance itself will produce a desired outcome. But what does it actually look like when nature balances itself?

Vast numbers of individuals struggle to recognize that sportsmen and conservationists have spent the past 130 years, and billions of dollars, implementing the North American Model of Wildlife Conservation to maximize game populations for both recreational enjoyment and consumptive use. As a part of the model, predator numbers have been and continue to be controlled. Sportsmen have been utilized as a tool for keeping game populations at a manageable level, creating a healthy balance, and providing wildlife for our use and enjoyment.

Here is the kicker – for nature to balance itself, Preservation takes the place of Conservation, allowing predator populations to go unchecked. This, in turn, allows their numbers to multiply to the point they overrun and collapse their own prey base, potentially leading to their own demise through disease and starvation (an end no animal deserves). The result leaves us with very little of either predator or prey, far fewer animals to enjoy, and added complications with other aspects of the “balanced” ecosystem we have created through 130 years implementation of the North American Model of Wildlife Conservation. Preservation has its place and is valuable in some instances, but not after sustainable numbers of a species are established, so long as Conservation can then be implemented.

Most are not aware that after much deliberation and even court hearings to get there, a grand total of 300 wolves was the original goal number set by the U.S. Fish and Wildlife Service for the entire Northern Rocky Mountain Population Segment (NRMPS). The NRMPS area encompasses all of Montana, Idaho, Wyoming, and the eastern third of Oregon and Washington, as well as a portion of Utah.

Many have referenced black bear and mountain lion populations in their arguments and stated that State Game Management Agencies have neglected their responsibility to manage wolves in the same manner as they manage black bear and mountain lion. What those individuals refuse to give credit to are the major differences between those species. Idaho alone houses approximately 25,000 black bears (per the Idaho Fish and Game), whereas there are only approximately 2,000 mountain lions (per the Idaho Mountain Lion Foundation). Wolves are like any other canine when it comes to procreation, meaning that when they go into heat, their natural instinct is to breed. Furthermore, wolves hunt in packs, whereas black bear and mountain lions are solo hunters. The reproduction rates alone differ drastically, but the overall effect of wolves on an ecosystem is profoundly compounded by their pack behavior and propensity to travel great distances.

Just how many wolves do we have today within the Northern Rocky Mountain Population Segment? Idaho Fish and Game released the 2021 population estimate this spring at 1,543 wolves; Montana has housed more than 1,100 wolves for years; Wyoming reported more than 300 wolves; Washington reported over 200; and Oregon reported 175. That brings the total reported wolves documented within the NRMPS to 3,318 wolves. In the 2009 delisting rule, the U.S. Fish and Wildlife Service suggested 1,500 wolves spanning the entire NRM DPS to be above the long- term carrying capacity, stating ungulate populations would be diminished and livestock conflicts would abound. The post delisting management objective is listed at 1,100 total wolves, with 400 in Montana, 500 in Idaho, and 200-300 in Wyoming.

Wolf Management is a polarizing, confrontational, and emotion-driven topic, no matter which side of the conversation you’re on. Therefore, in the interest of remaining objective, it is important to look only at the facts. Simple math does not lie.

Around 2008, we began recognizing that a wolf track here and there had become a wolf track in every drainage, followed by numerous kills of moose, elk, and deer. People were frustrated and disgusted by the fact that many of those animals were never fed on by the wolves that maimed or killed them. Suddenly, wolves were viewed as vile and evil animals. This was not the wolf behavior we were told about, and questions arose about the wolves we now have being “the right wolf.”

During that time, the aforementioned group of sportsmen decided they were going to do something about the problem. They could not just sit back and allow all the wildlife they were accustomed to seeing and appreciating be destroyed by an overpopulation of a single predator species. They wanted to see balance, and more importantly, they didn’t want to observe any more senseless and wasteful carnage.

Idaho opened its first wolf hunting season the following fall. This group of sportsmen decided they would forgo their annual excursions afield to fill their freezers and instead spend that season targeting wolves. They implemented every method they had found successful against every other big game animal in the state, but none of them harvested a wolf. Their frustrations lead to research. They soon recognized that both Canada and Alaska supported “trapping” as the most successful management tool for wolves. They cautioned us that wolf populations would multiply by 40% annually and suggested we plan on huge time investments if we genuinely wanted to make a dent in the wolf population.

The group researched and phoned the only local “trapper” they could find and told him they wanted to buy him lunch. One gentleman in the group wasted no time in demanding, “We want you to teach us how to trap wolves.”
The trapper just shook his head and replied, “I don’t trap wolves.”

“Well, do you hunt elk?” another asked the trapper.

A short pause was followed by the trapper’s response, “Of course I hunt elk. I live in North Idaho and that’s how we feed our family.”

Another gentlemen proclaimed, “Well then you’re obligated to trap wolves! You’re the only one we know of who knows how to do this and you’re telling us you’re not going to help the elk herds?”

After another thoughtful pause, the trapper replied, “You don’t get it. I’m obligated to make house payments, feed my family, and keep the lights on in my house. Wolf trapping will cost you so much money, you won’t be able to do it.”

Dumbfounded by the response from the person they viewed as their only ray of hope, a defeated tone fell over the group and one of the guys stated, “Well, shoot. I spent $3,000 targeting wolves this year and didn’t remove a single one. I should have just given you that money and had you go reduce the wolf numbers where I hunt elk.”
This sparked a whole other conversation. One of the guys piped up and said, “What will it take? I’m serious. I’ll pay you.” By the end of that conversation, the trapper told the elk hunters that for $500 per wolf, it would be worth it for him to run a wolf line while he was trapping bobcats and martin through the winter months.

That meeting sparked a series of long conversations with Idaho Fish and Game biologists, conservation officers, sportsmen groups, and eventually a lawyer who researched and drafted the organizational documents, and eventually, a 501c3 application. A name was needed, so the group posed the question, “When your game populations are suffering great loss and your way of life is at risk because of it, what exactly do you call an organization who fights to control the predator population that could be the demise of all that seems to be at risk?” The Foundation was the answer.

With that, The Foundation for Wildlife Management (F4WM) was born. Established in 2011 and obtaining 501c3 status in 2012, the Foundation for Wildlife Management has grown to more than 3,500 members spanning 42 states, the majority of which live or recreate within Idaho and Montana. We now have seven established chapters, with five in Idaho, two in Montana, and startup interest in Wyoming. We attend all Idaho Fish and Game Commission meetings and have worked diligently to unite sportsmen groups across the region to combine our voices with that of Ag industry leadership, standing united to represent the rural lifestyle and concern for comprehensive science-based wolf management region wide. Our goals focus on widespread, overall wolf population management, but we also work with IDFG to target wolves where they are causing the most problems. We have removed over 1,600 wolves with roughly $1,315,000 (comprised of membership, banquet, sponsor, and donor funding), for an overall average expense of $816 per wolf removed. That’s very efficient compared to $9,000 per wolf removed through the Wolf Control Board. We have done this by bringing those who want wolves managed (State Game Management Agencies, Conservationists, U.S. Fish and Wildlife Service, Sportsmen, Recreationists, Ag Industry, and concerned citizens) together with the very few hunters and trappers who have proven they have the methods and means to get the job done.

For the majority of the general public, the F4WM program provides a way for those who work full-time jobs, have a family, kids in sports, and other obligations who cannot run a trapline every 48 hours. Those who recognize the complications with wolf management want to do something more than just complain about the problem.

For those who are willing to actually “do” something to make a difference, F4WM provides a mechanism for them to be a part of the solution! While most of us are sitting on our couch watching football and/ or spending time with our families, there are sportsmen and women out in the field married to a trapline, sometimes through blizzards and extreme temperatures, working their tails off in an effort to control wolf numbers in order to keep elk and other wildlife on the ground for all of us to enjoy through the generations and to keep the overabundance of wolves from generating even more enemies. A scientifically-managed wolf population is far more socially accepted by all who are affected by wolf numbers. The general public’s $40 annual F4WM membership helps keep those folks who have proven their abilities in the field!

It is the Foundation for Wildlife Management’s hope that through financial support of sportsmen efforts, wolf populations within the NRMPS can be sustained at manageable numbers that allow for balance between healthy predator populations and the prey base wolves depend on for their own survival. That balance is a fine line that is often clouded with emotions and opinions, all too often from individuals who are in no way affected by the outcomes of the management plans they so passionately meddle in.