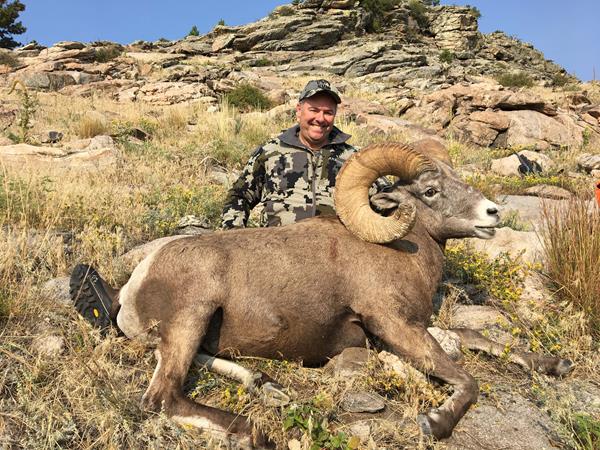 The dream began when my grandfather took me hunting on the Watt’s ranch near Sheridan, Wyoming when I was about 15 years old. Growing up in central Indiana, the only hunting was rabbit and squirrel. We didn’t even have whitetail deer where I lived, so going out west and seeing deer and antelope was quite a treat. The owner of the ranch was Dave Watt, and he had a bighorn mounted in his house that he had taken the year before. With a gleam in his eye, he talked about the hunt and the fulfillment of a lifelong dream. I was hooked right then and there and knew that someday I wanted to take my own bighorn.

In my 30s, Wyoming started a point system, and after years of just sending money to them for a chance, I knew that someday I would have my tag. Twenty-two years later and now in my 50s, I finally had enough points to draw a unit that had the best rams and was accessible for a now heavier and older hunter. Talking to the biologists, I decided on an area where rams, on average, score about 10 points higher than other areas. The biologist referred me to Mike Wakkuri with Elk Mountain Outfitters. I spoke with Mike and told him of my now 30-year quest, but I was scared that my physical condition would keep me from getting to the rams. He stated that with his access and fourwheel capabilities we could keep our walking to just a mile or two each day, but I still needed to be in as good of shape as possible.

I drew the tag, confirmed my hunt with Mike, and started training when I could. I also bought a new Remington Sendero .300 RUM for the hunt and had to drive one and a half hours away to a range where I could shoot up to 500 yards. The time to hunt finally came. I drove out a few days early to try to adjust to the altitude change, although I could still feel the lack of oxygen even after a few days there.

Being with Mike, his mother and father, Karma and Myron, and their future guide, Brady, was a joy. They knew how important this hunt was for me and made sure the whole experience was one I would never forget. We first took to the mountain two days before opening day. We rode a Polaris Ranger up to the glassing area and only had to walk a short distance before we found a group of rams. We kept an eye on them from about 900 yards that day and made a plan to come back the next day, put the rams to bed, stay on the mountain with them, and be there opening morning when they got up.

The next day, we loaded our packs for an overnight on the mountain and headed out on the Ranger to find the rams. They had moved to a vantage point overlooking our trail in, so we had to revert to hiking. I mainly focused on not falling, tripping, or twisting anything, knowing that my job was to stay unhurt, get close enough, and make a shot. Mike and Brady’s job was everything else, of which they were total experts, matching their hunting pace and techniques to my abilities.

In the group of rams, we identified four possible shooters, and I told Mike I would be happy with any of the four. One ram was a beautiful black color, and another ram seemed to pose quite a bit so we called him “The Statue.” From 900 yards, it was hard to tell which was the biggest, but that didn’t mean that much to me because they were both beautiful, legal, mature rams. We put the rams to bed that evening, and I tried to sleep without thinking about the bears and the next morning’s hunt.

Before daylight, we started the hike up to where we had put the rams to bed, and soon after daylight, we had them located. This morning was different because we could actually stalk them. The wind had picked up, which complicated the stalk a little bit, but we soon closed the distance to about 400 yards. Mike located a spot in between some boulders a few yards closer to set up for a shot. I climbed up and got settled in at 360 yards. We needed the rams to move up the mountainside just a few yards because a knife-edge rock formation jutting into the air was blocking a good shot. I put a shell in the chamber and secured my rest, but then the wind shifted. Mike tapped me on the shoulder and said we had to quickly back out because of the wind. I handed him my gun and pack and climbed out as quickly as possible. We dropped back about 60 yards and then looked up and saw that the rams had finally started to move up.

Mike looked me in the eye and said, “How do you feel about 420 yards?”

I didn’t see a great rest spot, so I said I would feel better about a 360-yard shot with the setup I just had. Mike tried to find another setup spot and discovered some mule deer bedded between the rams and us. Getting any closer was not an option without spooking everything, and the rams were quickly working their way over the top.

We rushed back to the original 360-yard setup. I climbed up on the boulders and got back into as comfortable a position as possible. Mike handed me my rifle, and I laid it on my pack and scanned the mountainside with my scope for the rams. With the wind blowing up my back, I knew time was in short supply. The first ram I could easily get into the crosshairs was the black ram. He was big and beautiful and was standing separate from the other rams, perfectly broadside.

As I took the safety off, I told Mike and Brady, “I am taking the black ram. Fire in the hole!”

I took a breath, held the crosshairs in place, and squeezed. Much to my surprise, the gun dry fired and nothing happened. Mike pulled his eyes away from his binoculars and quietly said that he had taken the shell out of the chamber for safety when we had to back down from the setup earlier. I jacked another shell in the chamber and tried to get the black ram back in my sights, but he had now turned straight away.

Not missing a beat, Mike said, “It is just as well. I think the one below is bigger.”

The ram below was the one we had named The Statue. I put the crosshairs on him, but Mike said not to shoot as there was another ram standing directly behind him. Through his binoculars, he could see another set of legs, but the extra legs were almost impossible for me to see through my scope set at 10X. I was blessed with one of the best bighorn guides, Mike, saving me from killing two rams with one shot, which would have probably happened if I had been by myself.

The Statue ram finally stepped away from the other ram, and Mike and Brady whispered in unison that it was all clear to take him. I focused my 300 yard crosshair line a little high on the ribcage, concentrating solely on holding the scope on the spot I had picked. Slowly squeezing my whole hand in anticipation, I prayed for the gun to go off. It seemed to explode in my hands with the scope jumping up into my face, but the bullet was on its way. The last thing I saw before the gun moved was the crosshairs perfectly on the spot I had picked.

Before I could get the gun back into position and find the ram through the scope, Mike tapped me on the shoulder and said, “Great shot! You just killed your ram!”

The ram had dropped where it stood. The Nosler Trophy Grade 180 grain Accubond bullet had done its job, dropping him on impact. As we approached the downed giant, the other rams were slow to leave, allowing me to get a photo of the black ram, which was smaller. My ram green scored 183", and I am sure the black ram would have been in the lower 170s .

A lifelong dream had come true. God is great all the time. Thank you to Mike, Karma, and Myron Wakkuri and their apprentice guide, Brady, of Elk Mountain Outfitters for their support, care, and expertise. The whole experience could not have been any better, and I plan to hunt elk and antelope with them in the future.