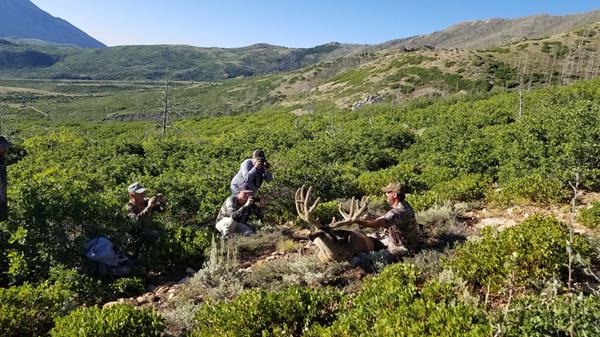 Archery has always been a part of my life, from following my dad around with a recurve bow as a kid to traveling up and down the west coast, shooting the tournament circuit. I love hunting the blacktail and mulies in northern California, but I always had the dream of harvesting a velvet giant. As a kid, I would spend hours looking over hunting magazines, hoping someday I would be that guy in the pictures.

I had been building preference points for different states for quite some time. My co-worker and longtime Huntin’ Fool member Jeff Yancy would always bring his monthly magazines in to work. I was not a member of Huntin’ Fool, but I would read the articles and look at the draw odds for each state to determine what hunts to apply for. I never thought I would draw so soon. Yes, I am that guy who drew the only non-resident archery tag for the Henry Mountains.

After receiving my successful email, I realized there was not a lot of time until August, so I went right to work. The first thing I did was call Doyle Moss of Mossback Outfitters to schedule a guide. The next few months were spent looking at maps, gathering information from other hunters who had been in the area, getting into shape, going over my archery equipment, and making sure my shot was the best it could be.

We spent five days in the Henrys and were amazed at the quality and quantity of deer that were there. The bucks we saw blew our minds, and before we knew it, opening morning had arrived. The stage was set and the spotters were in place and so were the nerves in my stomach. Colton and I sat on the side of the mountain before daylight, and we were surrounded by tall, thick oak brush. I remember thinking that it would be impossible to shoot a bow or sneak up on a deer in this stuff. We kept fighting our way through the thick brush towards the direction we had seen the 10x10 the morning before. Our plan was to get in front of him and let him feed to us.

After about 30 minutes into the hunt, Colton turned to me and whispered, “They found the buck.”

The spotters were communicating with Colton via radios and earpieces; I had no idea what they had been saying.

We kept moving in the same direction, and Colton whispered, “Get an arrow ready. He is about 40 yards away.”

As we kept moving in the same direction, the brush was starting to break up a little bit, and then Colton said the buck was 15 yards in front of us. Right then, I spotted a smaller buck to our right, looking right at us. We stopped and did not make a move. He was about 75 yards away, and it was a staring competition for about five minutes. He then turned and ran away, blowing and crashing through the brush. I thought the game was over and we were back to the drawing board. Then, right in front of us, we could hear the big buck running through the brush. I drew my bow and followed him, running at full draw until I could get a good shot. He stopped broadside in a small opening. My guess was that he wanted to see what had spooked the smaller buck. Colton whispered “50” to me. I could hear the anticipation in his voice, so I quickly took the shot. It was a perfect arrow placement right on the spot. The buck took off running for only about five seconds and then he took his final step. The big buck was down. Colton turned to give me a hug and said, “You did it! Congratulations!”

We spent the next few days in the Henrys looking at all the wildlife the mountains had to offer. We relaxed in camp, ate good food, talked about the hunt, and looked at pictures from the trip. I remember showing my dad a photo of the buck, and he turned to me with a tear running down his cheek and said, “You are now the guy in the magazine.” Then he gave me a big hug.

This hunting trip was special and one I will never forget, not because of the size of the animal I got, but because of the friends and family I got to share it with. Having my hunting partner, my dad, by my side is what made this hunt amazing.

I am proud to say I am now a Huntin’ Fool member. I look forward to planning my next adventure with information from this great magazine.