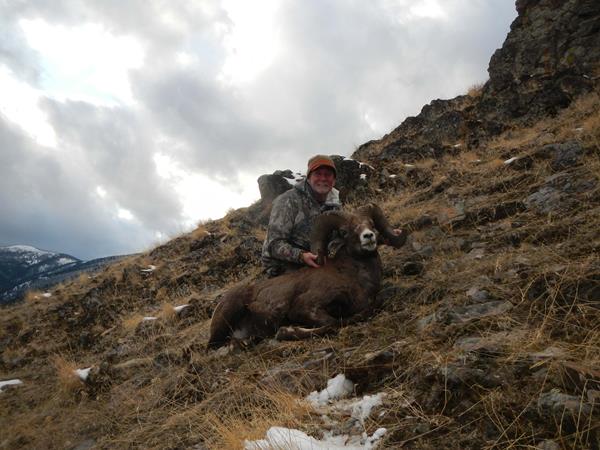 Fairy tales do come true! For so many hunters, chasing the dream of being able to hunt a sheep in our lifetime may feel at times like it may never happen. That was my feeling until the most bizarre summer of 2020. Twenty plus years into my dream of pulling a sheep tag, I got all those familiar “unsuccessful” letters and emails from so many of the states I had applied to for years. However, I somehow missed the Montana draw date this year. A few weeks later, I received a very thin white envelope in the mail and almost tossed it without opening. Fortunately, I decided to open it and the first thing I saw was “$1,250.” I thought to myself, “What in the world did I spend $1,250 on?” Immediately, my gaze rose to the top of the page and I saw the Montana letterhead and the first word, “Congratulations!”

Once I picked myself up off the floor, the planning started in earnest. I had drawn a Lower Rock Creek ram tag, and being a non-resident, I knew what my summer vacation was going to look like. I jumped on the phone with a few people in the sheep community to get a better handle on what to expect and to see if they had any contacts in Montana. I eventually called the president of the Montana chapter of WSF who gave me a name and number. He in turn gave me a name and number and that person gave me the name of one of the previous year’s tag holders. I reached out to Rich and it was the best gift a >1 member could hope for. Rich was retired and was obviously chomping at the bit to go on another sheep hunt. We agreed to meet up in July when I came out to scout the unit. He offered to come and glass on my hunt, and I was thrilled. It turned out he was with us all 10 days and was my biggest cheerleader.

I worked with a partner, and while we had decided the first 10 days of November would be best, my partner had the first two weeks on the calendar already. After a phone call, we decided to go the last week of October and then come back the third week of November if we could not seal the deal the first trip. That is exactly how it played out.

The first trip found my youngest son, Chase, and me driving into the unit just as the first big storm of winter hit Montana. The going was slow, and the temperatures were bitter cold. We met up with Rich the next morning and got word that one of the guys who had helped him the previous year, Jeff, was coming in the next day to help. I was excited, but I was also suddenly feeling some pressure. Pressure I was putting on myself and had not expected. This unit had 100% success the last five years, and the thought of breaking that streak added to the reality that this was my one and only chance to fulfill the dream. We glassed up sheep all week, and by mid-week, we began to see more rams start to filter in. Glassing in -5 degrees for hours on end is not an easy task. Fortunately, the temperature moderated as the week progressed and it became bearable. On day three, we found a group of four new rams with two that looked really good. One was heavy all the way to the 3/4 mark while the other was a little thinner but appeared to still have his lamb tips. He was really long and just looked cool. This was where having people around me who had hunted sheep before really helped.

As the week was winding down, the pressure seemed to build. Rich and Jeff both assured me that going home empty-handed was no big deal as the rut had not started yet and when we came back in two weeks there would be more rams in the valley. We named the best ram we had seen, and for better or worse, Chase and I left for the 10-hour drive home while Rich and Jeff went back to their lives not too far away. Those were two very long weeks!

As the time came for us to return, my oldest son was able to break away from work and now I had both of my boys with me. The thought of fulfilling this dream with them there was giving me goosebumps. Rich and Jeff were there again, and we began the task of surveying the valley for the rams we left as well as any new ones that may have shown up. We found a new ram that appeared to be everything I had hoped for in a ram, but was he as big as the number one ram from the first trip? We could not find him that first day, and I was hoping he had not left to find more ewes elsewhere. By mid-morning of day two, the number one ram from earlier showed up, and before long, he and the new ram were together on the hill. Those two rams were definitely the class of what we had found in 10 days and appeared to be equal in size. The ram from our first trip had one horn broomed and one a little longer and may have scored a tiny bit more, but the ram we had named “Snowball” because he had snow packed into a small divot on one of his horns was evenly broomed and had a beautiful, rich dark chocolate coat with matching dark horns. That is what sealed the deal for me.

We made the decision to make the climb and put on a stalk. Knowing that it might take several tries to pull it off, I did not want to wait until the end of the week to see if anything better would show. We packed up and off we went. An hour and a half later, we were in position but neither of the rams were visible to us. About 15 minutes went by and we heard two rams butting heads but could not see them. We hoped it was them and decided to wait them out and see if they would come out of the trees. Another gut wrenching 30 minutes and finally we saw them climbing the mountain. As I laid prone on the snowy ridge, time suddenly slowed. I put Snowball in the crosshairs, but the other ram moved between us. This played out about six times before the shot presented itself. I could hear the whispers behind me, but I could not tell what they were saying. I was locked into the gun, and when it went off, 20+ years of a fairy tale became an awesome experience with both of my boys and two new friends!

My takeaway from this experience was twofold. The sheep hunting community is unlike any other. Those of us who hunt deer and elk keep information and our help reserved because we are going again next year. I saw firsthand how open so many people were with information. How could I ever thank Rich and Jeff, who had a slam and had been on about 20 sheep hunts, for their invaluable insights and help? After spending 10 days with these two and now having harvested a sheep, I totally get the giving attitude that sets the sheep community apart. I am now one of those looking to go on another sheep hunt even if it means just being there to glass and pack. In fact, I am looking forward to watching someone else make those emotional decisions that must be made. I will just bring my glass, a pack, and the pom poms to cheer on the tag holder.

I am Jim’s son, Hunter, and I was on this sheep hunt with my dad. Unfortunately, this was my dad’s last hunt. He unexpectedly passed away while he was at the gym keeping himself in what he called “Sheep Shape.” We feel truly blessed that he was eventually able to do his dream hunt with his two boys at his side, and it couldn’t have come at a better time, two months before his passing.

I bought a wall tent a few years ago, and my dad gave me the idea to let everyone who took an animal while using the tent write their name on the back wall with a sharpie along with the state, date, and what they got. We were unable to bring this tent along on his sheep hunt, even though I so badly wanted it there so he could write his sheep on the wall. Later, during our drive home, the three of us decided that this was such a special hunt we would make an exception and let him write it in the tent. Unfortunately, he passed before he got a chance to write in the tent, so during his praise of life celebration, we had the tent set up and my mom wrote in the tent for him with my brother and myself at her side. She wrote, “In loving memory of Jim Bouma and his final hunt. Bighorn Sheep Ram, Babcock Mountain, Montana, November 15, 2020.” Now every time I use that tent, I will be reminded of all the time I got to spend with him and his “hunting career finale.”