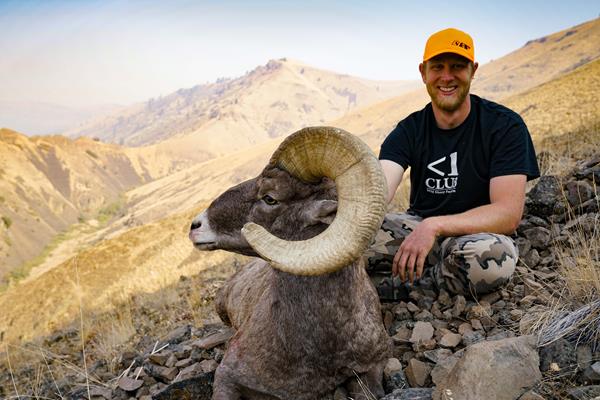 I’m not sure if there is a typical route to becoming a sheep hunter, but I’m quite sure mine is not the beaten path. My hunting obsession started decades ago. At that time, I was just a young boy following my father around the sagebrush of eastern Washington. We hunted anything in season, and there was never talk of passing on legal game in search of larger antlered quarry. After a brief, yet intense waterfowl phase in my late teens, my focus shifted to archery mule deer hunting. As that focus intensified, I began to follow the bucks out of the sagebrush and into the mountains. It was here in the mountains that the foundations of a sheep hunter were laid. I thought I was just chasing the bucks where they lived, but I’ve come to realize it’s not the deer I’m hooked on, it’s the mountains themselves. The more time I spent in the high country of the West, the more respect and admiration I gained for the animals that made a living at the top of the peaks. None were more impressive than sheep. Their elegant, twisting horns and the way they seemingly prance among the steepest cliffs and most unforgiving landscapes on earth mesmerized me. I knew someday, somehow I needed to chase the king of the mountain.

Anyone who has applied for a sheep tag knows that nobody actually draws one. All you are guaranteed are decades of unsuccessful attempts. After years of attending the Washington Wild Sheep Foundation banquets as well as the Full Curl Society’s event at the Western Hunting Expo, I began to notice the same fire in every attendee’s eyes, women and men, old and young. This fire was unlike anything I’d ever seen before, a burning desire to again chase sheep or chase wild sheep for the first time. I knew that same fire burned in my eyes. When it comes to sheep tags, there are two options – Lady Luck or wads of cash. Knowing I’d likely never have wads of cash and that Lady Luck may never side with me, I decided to make a third option, relocate to a state that requires neither to hunt wild sheep.

After some serious considerations, my mind was made up. I would hunt sheep. I quit my job of 10 years, loaded my pickup, and made the 2,500-mile drive to Alaska. In 13 short months, I would be an Alaska resident and sheep season would be open. That is when this story should have started. However, fate had different plans for me. Every year, I consult the Huntin’ Fool pages and apply all across the West. By the time I settled into my new Anchorage apartment, most of the states had posted their draw results and I was goose eggs across the board.

The fifth morning in Alaska, I awoke to a simple message on my phone, “What did you draw?” This is how this story begins. I was still half asleep as I logged onto Washington’s draw results and began to scroll through my list of “Not Selected” applications. Halfway down the list, I read the word “Selected,” but in my pre-coffee stupor, I assumed it was for the spring bear tag I had filled the previous month. Then I reached the bottom of the list and again read “Selected” followed by “Spring Bear.” My mind began to fire. What had I drawn and glazed over? As I scrolled upward, my eyes landed on “Selected – Any Ram.” I was in disbelief. After more than a couple page refreshes, it began to sink in. I had beat the dismal odds and drawn one of the most coveted tags available long before my time!

As a young kid, I had watched sheep on the very mountain I would be hunting, I knew the area, I knew people who had hunted the sheep there, and I was confident. I knew harvesting a ram in the 25-day season was all but a given; however, I was dedicated to spending as much time out there scouting as I could.

A month before season, a good friend agreed to help me look at sheep. After three days of scouting, I was feeling great about the hunt. We had found multiple bands of rams, and a few of them were sheep I’d be very happy to hang a tag on. However, we didn’t turn up any of the real studs I knew haunted these open canyons. A call to the local biologist provided some crucial but unwelcome information. The harsh winter had resulted in at least 20 mature rams succumbing to the elements. When I asked how many older rams had made it through, he only responded, “Not many.” Knowing this and that there were a few other lucky hunters holding a tag, I knew my best option was to spend the week prior to season scouring the unit for “the ram” and try to capitalize on open morning.

That week may have been the best week I’ve ever spent in the mountains. I spent all day covering country and admiring sheep. As the sun set on the night before the opener, I watched the ram I had fallen in love with. Of the 65+ rams I had found, he was the one that had stuck with me. He had everything I wanted – age, a beautiful dark chocolate hide, good mass all the way to his broomed tips, and an overall great look and shape to his blonde horns. As my hunting buddies began to roll into camp, I was excited to share photos of the rams and discuss strategies. It was decided that Zach, the magician behind the camera, and I would set out along the ridgeline to put ourselves in a position to peer down into the canyons that “my ram” had been frequenting. The rest of the crew would perch along the adjacent ridgeline, giving them front row seats to the hunting action and a different view into the canyon in case the rams were hiding in one of the many nooks or crannies.

As sunlight cut through the smoke from wildfires in the surrounding area and the yellow grass canyons began to reveal bands of rams, we crept along the ridgeline, studying each group of sheep, looking for the one. After thoroughly glassing the three ravines where I had previously seen my ram and his seven younger comrades but seeing no sheep, I began to worry he may have sensed our plot and vacated his home. Knowing the season was merely an hour old and time was on my side, we continued down the predetermined path. As I crested a small rise, I noticed an odd shape and color in front of me. Bringing my binoculars into focus, I realized it was three rams. They were well aware of my presence. Not knowing if any of these rams were the one we were looking for, we quickly moved into position to begin an assessment. Of the three visible rams, two were posed up, showing themselves clearly. The third ram held his head low and stood behind his younger counterparts. After five minutes or so, he finally raised his head. Looking through the scope, I saw that his curled horns cleared the backline of a young ram. My heart began to pound, and my mind went blank. This was it. Fortunately, I had already ranged the band and dialed the scope in. I began to take deep breaths to try to calm my nerves. As the sheep began to feed and slowly work away from us, the big ram refused to offer an ethical shot.

Fifteen minutes later, my deep breathing had barely brought my nerves back into check. I stayed glued to my rifle, waiting. Finally, the young ram zigged and my ram zagged. He stood at 232 yards. I settled my crosshairs and did my best to squeeze the trigger. The rifle bucked, and my view through the scope jumped. Through the earplugs, I couldn’t hear the bullet find its mark. As I turned to ask Zach about the quality of the hit, his answer brought an ear-to-ear smile to my face, “He’s down, buddy!”

I had no words as I put my hands on the ram for the first time. I just stared in silence, overcome by respect and awe. I don’t know how long I was in the trance, but when I came out of it, I truly understood why that fire burns in every sheep hunter’s eyes and am honored and blessed to join the ranks. I owe a huge thanks to all of my friends who showed up with backpacks to help pack my ram off his mountain throne and to the amazing organizations, like the Wild Sheep Foundation, for putting and keeping the magnificent wild sheep on the landscape.