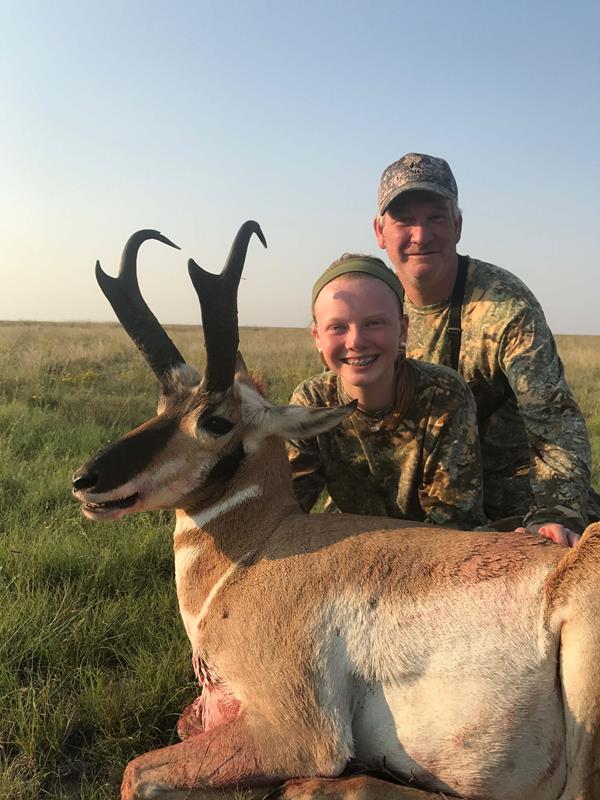 For the past three years, my dad and I had been discussing going antelope hunting together. When we finally decided we were going to New Mexico, I was filled with excitement for my first big game hunt. I knew it was going to be a fantastic experience for us both. The plan was to travel via plane, but Hurricane Harvey left major destruction and our flight was canceled. We were forced to make the 16-hour drive and faced tornadoes at the beginning of the trip. This caused us to turn around and start a day late. Once we arrived at the New Mexico border, I began to see antelope dot the side of the highway.

When we arrived, we met our guide, Dan, and were told the game plan for our big day. We started out by glassing different antelope. We came to a ridge and saw a shooter buck in the valley below. I set up in a prone position and dialed in. The buck bedded down and made it impossible to get a clean shot. We sat there for an hour, and I was getting burned and ants were crawling all over me! The antelope finally stood up, but he quickly ran off. It was time to get in the truck and find another one.

We spotted another shooter buck beyond a herd of cows in an open pasture. Dan had cow decoys, and the stalk began. Once again, I set up in a prone position. I got comfortable and pulled the trigger, but I missed. Luckily, the buck did not run away and I had one more chance. This time, I hit him and he fell to the ground. Unfortunately, his head popped up and I had to finish him of. With a closer look, I was able to see my reward, which was a nice buck.

I want to thank my dad for providing me with this experience and Cola Blanca Outfitters for a great hunt!