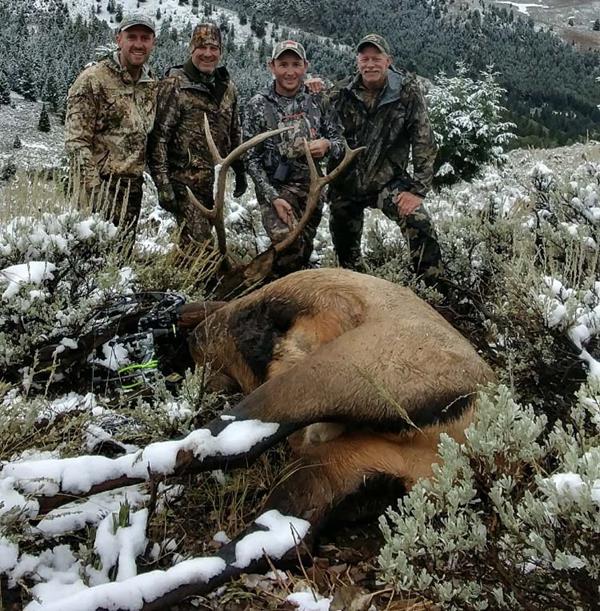 In 2017, the western hunting states were not kind to my North Carolina hunting buddy, Tom Mount, and me. We had drawn four total tags in 13 years of applying in the western states, but we were not giving up. When we strike out on draw tags, we satisfy our elk hunting addiction by making our way from North Carolina to Idaho for an over-the-counter, self-guided archery hunt. Tom and I have mostly taken trips as a duo, but we decided to take two buddies with us this year – fellow Huntin’ Fool member Carter Jordan and Kyle Kiziah.

When we arrived, we had bluebird skies and decided to hunt close to the trailhead that morning and return to prepare our packs for the weeklong pack into the backcountry. Tom and Kyle called in a very good bull but could not seal the deal. Carter and I also saw seven different small bulls that morning, but after a hard decision, we decided to leave this area as our backup plan and pack into our favorite area.

By the time we made it to our desired location, winter had arrived. The temperature dropped quickly and so did the snowflakes. The bulls were quiet and high up, which made for difficult hunting in the snow. We caught a break mid-hunt when some bulls finally cranked up and we were able to pinpoint one or two. Kyle found a spot where some elk had been crossing and I had heard one bugle the night before. He set up that evening, awaiting a bugle, and to his surprise, some cows and a very nice 5x6 bull made their way right down the path. He made a great shot on the bull. Unfortunately, the snow started pouring down and quickly erased a blood trail. We were able to follow the blood long enough to know which direction they ran. It only took an hour the next morning to find his bull in the open country. We quartered his bull and made the pack out before dusk.

The next three days were unseasonably cold, snowy, and windy. I continued to hike to the top of one mountain each day, and on one of the worst weather days, I was greeted with an encounter with three Rocky Mountain ewes. Meanwhile, 100 yards back from camp, Carter was having a 20-yard encounter with a big bull moose.

The last two days passed by with a few encounters with smaller bulls and cows. Tom almost connected with one great bull but could not seal the deal. The last day came, and Tom and I struck out to where he had seen the big bull. Nothing was seen or heard, so we decided to split off and meet back at camp at 1:00 p.m. to pack out. Everything was quiet, so Tom made his way out first, and when he was near camp, he heard two bulls on top of the ridge above camp. The sun had come out for the first time in two days, and the bulls went crazy. Tom knew he had a few hours left to make it happen, so he hiked up the mountain. Carter had also heard the bulls and was attempting several stalks while enjoying the best show of the week.

Meanwhile, I was making my way back to camp about an hour behind Tom and heard the bulls above camp. I looked at my watch and saw that it was 12:20 p.m. I did not know Tom was up on top already, talking to the elk. I knew I needed to be back at camp around one, so it was now or never. I had only traveled halfway up the ridge when I heard the bull bugle. Tom had stalked within range, but the cow spooked and took the bull away. Luckily, the bull bugled and I could tell he was coming closer to me. I was making my way through the pines when I heard a limb break and saw a cow coming my way. She walked right by me, upwind, followed by a large 5x5. He walked broadside at 30 yards, and the rest is history. I looked at my watch and it read 12:50 p.m. Tom and I have a history of last-day kills, but this was no doubt waiting until the last minute.