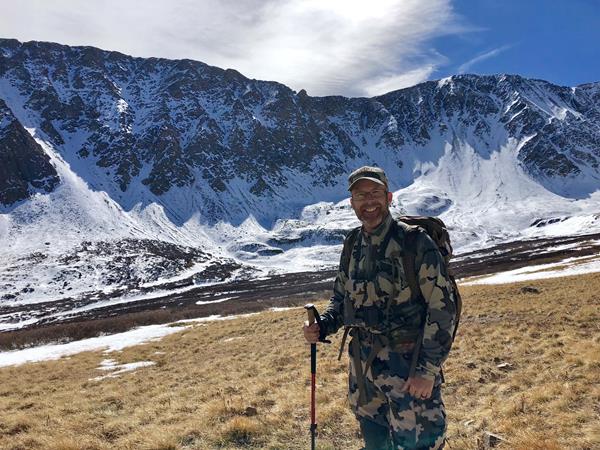 The 2017 elk season had just ended. While I enjoyed some great adventures and close calls, I never did seal the deal. I returned home, lamenting that it would be a full year until I would get to hunt in my home state of Colorado again. As I began to plug back in to life as the Senior Pastor of a large Denver congregation, I spent nearly an hour listening to my backlog of phone messages. There was one listed as “Unknown,” so I saved it until the end, surmising it was probably some sort of robo sales call. I usually delete those Unknown messages without even listening to them, but something prompted me to listen to this one. I was so glad I did! It was the Colorado Parks and Wildlife (CPW) Department calling to inform me that someone had returned a mountain goat tag and I was next on the list. I enthusiastically returned the call and sent in my check for the tag. It was a fourth season nanny rifle tag in unit G7 within an hour of my house. The season was scheduled to start in just three weeks, and I was determined to get it done with my bow.

Most people have five months to research, scout, and prepare, but I only had a few weeks. I was way behind! I began calling my experienced hunting buddies and several CPW Game Wardens and hit a few bowhunting forums, humbly pleading for input and advice. I bought a unit map, downloaded that area on my onX App, and spent hours on Google Earth. I retuned my bow after all the abuse it had taken on my elk hunts with multiple tumbles on the steep slopes. I had already dropped 40 pounds in preparation for hunting season, but I strained to get into “Goat Shape.”

I narrowed down my target hunting area and began glassing the slopes one week before the hunt. Two days before opening day, I spent 10 hours hiking, climbing, and glassing the steep slopes. I counted about 40 goats on that day, but all of them were extremely difficult to access due to the forbidding terrain. In a moment of frustration, I secondguessed my plan to only use my bow; my 7mm Remington Magnum was looking mighty appealing. However, I quickly shook off that fleeting temptation.

My hunting buddy, Brian Campbell, and his wife joined my wife and me at a condo in nearby Georgetown, Colorado for the first two days of the season. The girls would go shopping while the boys would go hunting. What a fun plan! The next morning could not come soon enough.

When the alarm sounded, I jumped out of bed, geared up, loaded the truck, and set off for my dream hunt. While it was still dark, we approached the steep, rocky slopes where we had seen a herd of goats the night before. We located them, but they were extremely high up and in some snow laden, treacherous looking cliffs. We were ready and willing to go anywhere and do anything for the cause, though. In the past eight years of living in Colorado, I have learned one lesson over and over – if you’re given even a remote chance at success, just go for it. Don’t hold back. Don’t wait for a better opportunity. Make the stalk, no matter how far the distance or how high the climb. Another opportunity may never come. We began the rugged ascent.

After three hours of climbing hand and foot, sliding down loose rock slopes a few times, and roping up to get past some danger zones, we reluctantly came to the conclusion that we had gone as far as we could go. We were cliffed out! With the goats still a long way away and no hope of going any higher via this route, we decided to go back to the truck and drive to another slope to glass.

At 11:00 a.m., we made it back to the truck, exhausted and pretty bruised up from our five-hour climb. Just as we were about to drive to the next spot, Brian glassed a grassy, snowy ridgeline across from us and spotted two small herds of goats. They were bedded on the steep slopes in the warm Colorado sun at 13,000 feet. They were about three miles away and 3,000 feet above us, but this grassy mountain looked a lot more appealing than the rocky cliff face we had just scaled. We looked at each other and said, “Let’s do it. Let’s go kill a goat.”

Three hours later, we made it to the top of that ridge and began a stalk on a couple of nice goats. With an Ultimate Predator Goat Decoy attached to my bow, we were able to get within 80 yards of the bedded goats in wide open terrain, but then they moved on and somehow vanished over a rise. Just then, we saw another herd bedded down about 200 yards away. They were the ones we had glassed from the truck. Again, using the decoy, we got within 100 yards. When they would stand up and stare at us, I would lay the goat decoy on its side and they would immediately follow suit and bed back down. It was a pretty cool experience to “communicate” with them in that way. Eventually, this herd moved off without offering a shot and disappeared over the top of the ridge just like the last group. We followed them as far as we could, but when they went over a hellacious cliff face on the other side of the mountain, we had to turn back. We had come so far and now had nowhere else to go on that ridgeline.

We took a few selfies on the mountain peak at 13,200 feet and decided to descend and glass another slope. On our way down, we had one more ledge to look over. It was our last hope on this mountain. I prayed that we would encounter some goats over that ledge. I don’t know if God actually answers those “hunting prayers,” but as I slowly peaked over the ridge, I saw a herd of 10-12 goats about 60 yards away, feeding toward us. With no cover to hide behind, we sat down and trusted our KUIU and Sitka camouflage.

While most of the herd moved up away from us, a nice, mature nanny began slowly walking our way. I ranged it at 50 yards, then 45, and then 35 over a long span of 30 minutes. It was facing directly at us, and I was debating whether to take a frontal shot or not. Just then, it turned broadside, quartering away, and seemed to pose for me at 30 yards. With Brian filming behind me, I moved up to one knee, drew my bow, tried to relax, and let an arrow fly. My aim was true as the arrow struck the goat a bit far back but exited through the opposite shoulder due to its quartering posture. My heart and my mind were racing as the adrenaline pumped through my veins. To my surprise, the goat slowly walked off as though not even hurt. With no time to use my rangefinder, I held for 50 yards and launched another arrow. I could hear that beautiful “thump” sound as my arrow struck the goat and sent a huge puff of white hair up into the gusty winds. This time it bolted straight downhill and piled up on the steep, grassy incline. Goats are tough animals!

Brian and I let out a hearty cheer and then shared a manly bro hug. It was exactly like I had dreamt and prayed for it to be – a stunningly beautiful Colorado day, standing at 13,000 feet, surrounded by two snow-capped “Fourteeners” (mountains of 14,000 feet), having just climbed and crawled over 10 miles and 5,000 feet of elevation change, embracing my trophy Rocky mountain goat with a best friend, and doing it with a bow during rifle season. It just doesn’t get any better than that.

The nanny was aged by the CPW at 6 1/2 years old, double the typical age of goats harvested in Colorado, and the horns were measured at 8 1/2". The coat was long and thick as this was the latest hunting season in Colorado and the goat’s hair grows one inch per week at this time. The horns measured over the Pope and Young minimum; not bad for a nanny.