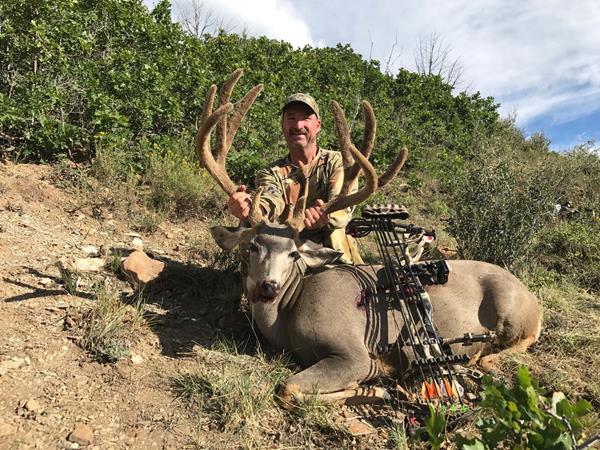 August 1, 2017, I received a call from the Utah Division of Wildlife Resources. They were offering me a limited-entry archery deer tag in the Book Cliffs because someone had turned the tag in. I guess I was next in line. Needless to say, I accepted. The hunt started in 19 days, and I was leaving on a weeklong trip on August 2nd. I would basically have one and a half weeks to prepare for the hunt.

I had never really had a trophy tag for anything, so at 55 years old, I was excited. I arrived two days early to scout. I found many bucks but not what I was looking for. I had set my goal on killing a 180 class buck. Opening day, I found the buck. He was in some country that was not really archery friendly for a stalk. I watched him again on day two in the same place.

On day three, I could not find him, so I moved and glassed a different drainage. Within five minutes, I found him in bed about half a mile from where he was before. I watched him for several hours to determine what other deer were in the area. I was able to stalk in on him from above, and my shot was at approximately 15 yards. I had killed a buck of my dreams. A friend of mine went along and helped on the hunt.

Layne is a young man who lives next to me, and I have watched him grow up over the years. With the short notice I had on this tag, he was available and I was so appreciative to have his help. There were so many blessings, including his wanting to go on the hunt, getting the tag to begin with, having access to the Member Draw information, and watching this buck for several days and ending up getting a shot at him on day three, making the harvest.

There is a lot more to the story, but I really just want to say thank you to Huntin’ Fool. Without the list of members who had this tag in previous years, I would not have known where to begin. I am not one who typically wants to hire a guide, and I never have in the past. I made calls to members, and they were so helpful. I was able to get access information to the unit, which was critical to begin with. Then they would share their experiences and I could figure out from there where the bucks were this time of year.