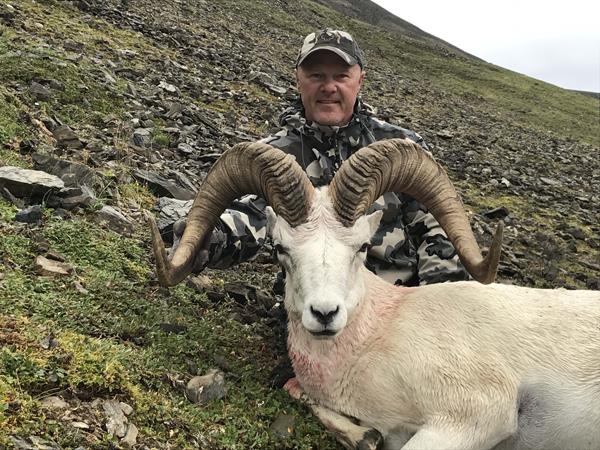 I grew up reading Jack O’Connor articles in Outdoor Life about his sheep hunts, never thinking I would ever be able to do the same hunts. At birth, my left leg was removed due to a birth defect and I was in and out of Shriners Hospital until age 12, having 13 operations during this time. As a young man, my dad and brothers hunted, and by age 15, I began bowhunting and my love for hunting grew. Also at around 15 years old, I began lifting weights and have lifted ever since.

After graduating from high school in central Missouri, I attended college in Rochester, New York at the Rochester Institute of Technology from 1984 to 1988. While at RIT, I harvested two archery bucks on two properties I had gained permission to hunt. During my last year of college, I married my high school sweetheart, Robin, and she moved to New York.

My first job out of college was just outside of Cleveland, Ohio. I moved a year later to the Bay Area in California, working as a Sales Representative for a large printing company. While there, I harvested a black bear with my bow in northern California near Burney Falls. Two year later, a sales position for the same company became available back in Missouri. Finally back home, my hunting got much more serious. I had the opportunity to harvest three black bears, three bull elk with a bow and two more with a rifle, a Yukon bull moose, and dozens of whitetail with a bow and a rifle.

A few years ago, I began looking into a Dall sheep hunt. I contacted several outfitters and watched many YouTube Dall sheep hunt videos. Once I told several outfitters that I had a prosthetic leg, they didn’t seem interested in taking me on. Watching several hunts on YouTube posted by Austin Atkinson of Huntin’ Fool lead me to Mont Mahoney of Alaska Dall Sheep Guides. Mont is a retired Alaskan Airlines pilot and owner/ operator of Alaska Dall Sheep Guides. After speaking with him on several occasions, I had a good feeling that he was the outfitter I wanted to hunt with. I spoke with my good friend and longtime hunting partner, David Ott, and we made plans to hunt the 2017 Alaska Dall sheep season.

Six months prior to the hunt, I began to break from my traditional workouts and started incorporating more CrossFit routines to increase my endurance levels. Eight weeks prior, I started hiking three miles several times a week with my KUIU 5200 Icon pack with 30 lbs. of sandbags.

Finally, the time had arrived. A week prior to the hunt, my wife of 30 years and I spent six days on the Kenai Peninsula touring Seward, Homer, and Girdwood. On August 7th, my wife flew home and David Ott arrived in Anchorage. After three flights, we were unloading our gear from Mont’s Super Cub into a tent. After quick introductions to the other hunters and guides, we watched a grizzly wandering around on the mountain across from camp. For the next day and a half, we sat at camp, glassing sheep with spotting scopes. Then, Mitch Atkinson told David and me to load our packs with everything for three days because we were going for a hike. At the time, I did not know that this was a test to see if I was capable of navigating the steep, rocky terrain.

The next evening, the day prior to the opener of sheep season, we loaded our packs with everything we would need at spike camp for three to four days. We took off late that evening, hiking three miles, trying to close the distance for the morning hunt. When we arrived at spike camp at around 10:30 p.m., Mont and Austin Allred, our meat packer, set up a Hilleberg tent and the three of us climbed into our sleeping bags for a short, very windy night.

At 4:50 a.m., we arose, ate a quick Mountain House breakfast, and started up the mountain. After hiking with loaded packs for two hours, Mont spotted two rams that he felt had potential for a closer look. At this point, we dropped into a shale ravine and began the arduous climb one step at a time, trying to keep my footing assisted with my Black Diamond trekking poles to steady myself. We closed the distance close enough two times to know they were both legal rams. Back into the shale ravine, I got my second wind with the knowledge that it was now or never to push hard to gain elevation and get above the rams.

After 30 minutes, we found ourselves 250 yards from not two rams, but four rams. Mont instructed me to get my breath and dry fire my rifle on the largest ram. While doing so, Austin set up his Vortex spotting scope with his Phone Skope to video the hunt. The rams saw movement from Austin and things started to happen fast. After a long climb and the excitement, I rushed my first shot and had a clean miss. Now all four rams were moving up the mountain in a very tight group. With directions from Mont, the largest ram broke away from the other three and exposed his vitals at around 280 yards. I squeezed off a shot, and it hit him just behind the ribs, angling forward into his chest. I chambered a third round into my 28 Nosler, and Mont yelled to put him down. The third shot connected at the base of his neck and sent him tumbling 40 yards down the rocky mountain.

We quickly erupted into whoops and hollers. After a few minutes of celebration, we arrived at my ram. We were in sheer awe of his size and the beauty of the surrounding mountains. Mont asked for a prayer to give thanks to our Creator and Savior for this opportunity. We then had a photo shoot that would make Sports Illustrated proud. Now the real work began with caping and quartering the ram and removing every scrap of meat, leaving only the guts and spine behind. We arrived back at the main camp late that evening and climbed right into our sleeping bags for a quick night’s sleep.

David Ott connected on an 11-year-old ram while being guided by Austin and Mitch Atkinson on day three of the hunt.

I am truly grateful to Mont Mahoney for taking me on as a client, knowing it would not be his typical hunt and one I could not have done without his help. I am also grateful that there are places so remote and difficult to reach that they stay basically untouched by mankind.