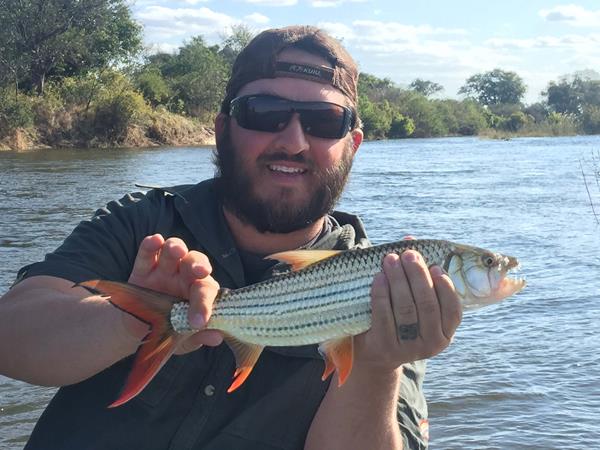 I love to chase sheep and cats in the mountains of the West, although I had always dreamed of making a run for a leopard at a truly wild place with no fence, no cages, and no interference in Africa. That dream remained unfilled, mainly due to lack of knowledge on where and how. Additionally, I didn't know anyone locally who had pursued animals across the big water. We all hear the stories, but I’ve had good luck at the Dallas Safari Club Convention finding resources that have had personal experience on just about any trip out there, and 2017 was no exception. After some asking around and checking some prices, I was drawn to a big bloke from South Africa, Eduard Katzke, better known at Katte. He was not a broker but the operator direct with Matetsi Parks, which was important to me. He is the kind of guy who really wants to know you and your family and find out what your hunting aspirations are. I began to realize later that he thinks of his customers as his extended family with hunting being a mutual connection. He creates lifelong friendships and isn't a one trip kind of safari operator.

Katte sold me on the type of guy he is in January when he asked me if I had a dollar, yes $1. I pulled the dollar out and he stuck out his hand and said, “This is Texas, and that is your deposit. Now shake my hand and we have a deal.” That deal was sealed. After some further discussion, my close friend Bill, Oestreich from Dease Lake BC, would be joining me for elephant in Matetsi unit #2 in Zimbabwe, Africa. My goal was a leopard, and with a historically lower success percentage in the market place, nothing else mattered to me but getting that done.

After some of the best airline service I have ever experienced on South African Airways, some 21 hours total of flying, and an overnight in Johannesburg, we arrived with someone there looking after me as soon as they opened the airplane door. Truly, I never wondered what if? It was a total first-class operation from the time I hit Africa. After exiting the Victoria Falls airport, there was the big bloke, Katte, and my South African PH, Prieur du Plessis, whom I had time to visit with in Dallas. After a cold beer and some visiting with the locals, we arrived in Matetsi. Africa wasn’t anything like I had seen on TV or in books as a kid. In fact, it reminded me of the Texas Hill Country, yet the game was much larger and potentially deadly. I loved it as soon as we hit the dirt road. We were greeted by Peter, our chef, Smiling George, my Park Ranger (handy on the AK), Shepard, my Zimbabwe PH, Johannes, a trusted longtime tracker and man of many skills from South Africa, along with many other staff members. There were fantastic accommodations in a very remote part of the world to the point that I felt a little undeserving considering the time I had spent in the mountains in tents and under tarps. Bill arrived a few days later and fell right in, ready to go.

After harvesting zebra and impala for bait, we started hanging and checking them daily. We had several hits on bait but generally females and/or cubs, with more than a dozen cats feeding at one time. We saw plenty of other game, but the leopard was what I was there for. With many rides up and down the Matetsi elevator, a South African’s attempt at the Olympic high dive event into the grass, we worked and put the miles on. Bill had harvested some great camp meat with an outstanding eland. He had also harvested zebra, impala, and kudu. Each evening, I thoroughly enjoyed the days spent in the field and time around an African campfire. Bill had harvested a great 50+ pound bull elephant after several days of hard hunting. I kept telling myself, Patience, it will happen.

Day nine proved to be my day in a tree aptly named “The Texan.” A couple years prior, a friend of mine's father had harvested a leopard out of the same tree. With a big male feeding, we set up a blind and walked in very early in total darkness, no lights. I’m not a stranger to walking in the dark in the bush; however, in Africa, you feel much different about knowing what is lurking, like lions, hyenas, 13 deadly snakes, elephants, which are surprisingly quiet walkers, and we knew of at least one big male leopard. To say my senses were heightened would have been an understatement. As we sat in the dark, twilight began to rise and we saw the leopard was feeding on the bait, but I could not see any crosshairs. When I turned on my factory set illuminated reticle, it was too bright and I couldn’t see the kill spot. I kept reminding myself what Katte had said in Dallas six months prior, “One thousand stitches per second.” What he meant was that if he got to us and was still alive, there would be potentially deadly consequences. I opted to wait for better light ,and five minutes later, the big male leopard was gone. Leopards have the sixth sense for when someone is watching or things are out of place and prove to be very smart animals. Kicking myself at camp, I hoped that wasn’t going to be my only opportunity, but I knew I had made the right choice not risking getting anyone hurt or having him run off. I turned down the factory setting on my Nightforce reticle just in case I had another opportunity.

That evening, we settled in the blind early and I played some Checkers, never making a sound or moving much for several hours. At nearly the same time as the day before, to the minute, the big male leopard jumped up into the tree. I was quickly on my rifle. The leopard inspected his area for anything out of order. Safety off, I waited in my shooting lane, ready for him to cross. Quickly, he began moving horizontally, and I squeezed off a shot from my Christensen Arms 6.5x284 Norma with Swift A frame 140 grain loads from Superior Ammunition. He sandbagged, and I watched him fall 18 feet straight to his back with a loud thud as he hit the dirt. Shepard and Prieur congratulated me, and we bailed out of the blind and went over to The Texan. To our surprise, the leopard was gone from where we had expected him to be in the nearly 10 foot tall very dense brush and grass. Immediately, we knew something was wrong. Then we heard a growl, but in which direction, we weren’t sure. Guns up and shoulder to shoulder, we heard another growl and figured out the direction. We began to back out, expecting a charge from him. It was a tense situation, but I felt totally at peace with it knowing I had two other guns and plenty of experience on both sides of me. As we backed out, we saw a paw and then an eye. We knew we needed to move quickly. I felt as if my shot was solid, and watching him sandbag, I just wasn’t sure what could have happened. The shot had been quick in a shooting lane; maybe I screwed up.

We went back to the Landcruiser and brought in the remainder of our trackers and George with the AK. As we inched forward, six guns at the ready, we cut a path in for the vehicle during some very intense moments. I felt terrible getting everyone and myself into a bad situation. Then, we found the leopard lying on the trail we had previously backed out on. I had hit him with a double lung shot, but I should have compensated for him moving quickly across the opening, maybe two inches back from breaking the shoulder. We had rushed over from the blind a little too soon. Nevertheless, I got a big male leopard. They are absolutely beautiful and dangerous at the same time. They deserve nothing but respect for what they are and how they live. Africa celebrates its big game, and after playing an unruly trick on Katte and Bill, we celebrated like I hadn’t in 20 years. Katte became known as “Tin Cup” after the 50 or so shot glasses on the floor and several in our party fell off to their beds, but we rolled on for hours into early morning. It was a great night with many stories, toasts to Africa and its people, friendships, and the true wild areas of the world. Katzke Safaris ended the season three for three on their leopard hunts, a true African Odds Beater.

Katte, Prieur, Bill, and I will surely spend another night around a campfire soon. We wrapped up our African trip with some time at Victoria Falls and some tiger fishing on the Zambezi River, spending face to face time with hippos and crocs. It looks like there is plenty more to see and do in Africa. The people of Zimbabwe don’t have much, yet they are always positive and looking forward to a day in the wild. They are extremely appreciative of hunters, having meat from a harvest and even something as simple as a good pair of socks. I was even more impressed when I found out how much Katte puts back into his area and its people by drilling water wells, providing a generator, vaccinations, a freezer, and many other basic items we would expect in the US.

I am looking forward to another 2019 trip with these guys. This time, we are headed to South Africa with my family and close friends at Katte’s place. I’ve been working on the Grand Slam of North American Sheep for the last couple years. Now an African Big Five? You only live once!