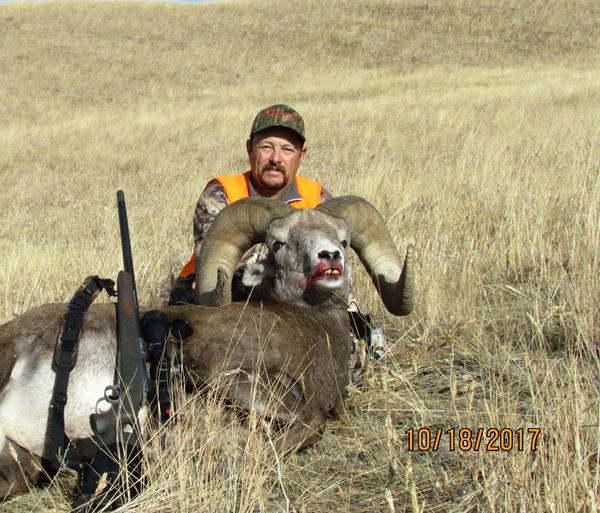 Over 10 years ago, I was talking with a great friend of mine, Ray Milligan. As always, the conversation turned to hunting because he is an outfitter in our area and it has always been a passion of mine. That day, he told me that if I didn’t start applying for a sheep tag I would never draw or acquire enough points before I became too old to hunt in that type of country. I had been applying in New Mexico for years, but after that day, I began applying in seven different states as well.

Last year, at the age of 59, I drew a Rocky Mountain sheep tag! I received an email from Huntin’ Fool, which I have used for over 10 years to help me decide when to enter applications, informing me that I had drawn this sheep tag for Montana. The unit was 216-20, the same unit that produced the largest ram ever taken in the lower 48 according to Huntin’ Fool. Every year, only two tags are given for this unit and I was lucky enough to draw one of them. Huntin’ Fool chose this unit for me based on my odds and the quality of sheep. I couldn’t believe my luck!

In the rural town of Rutheron in northern New Mexico, 17 miles south of the Colorado border, I reside and run my electrical contracting business with my son. The drive to Montana from there is about a 16-hour trip, covering around 970 miles. I knew I needed to get up there prior to my hunt to do some scouting and to get a little familiar with the area. However, due to a very busy summer and early fall season, before I knew it, it was already almost time for my hunt.

After talking to several people about that area, I decided I would hunt the last three weeks of the hunt because the later part of the year would better my chances of a successful adventure. I began looking for an outfitter who was willing to show me the area or give me tips on how to hunt this unit because I did not want a guided hunt, but I was met with little success. I decided to reach out to friends I had made while hunting in Kansas, and as luck would have it, they knew people who lived near Philipsburg and were able to get me in contact with them. Bill and his wife quickly became good friends. They agreed to scout for me, since I was unable to, and generously offered to help out even more when I got there.

Late in the summer, I had also begun asking around for a hunting partner so as not to go alone in unfamiliar country. There were a lot of takers early on, but as the date of the hunt drew near, it was looking more and more like I would be hunting alone. I then had another stroke of luck; my sister agreed to let me borrow her husband, Len Horan. He proved to be a great hunter, spotter, companion, and pack mule at 46 years old in great physical shape. The only issue with this hunting buddy was that on the trip to Montana, I would need to make a two-hour detour to pick him up in Fort Collins, Colorado where he would be visiting one of his four sons in college. We also agreed we could not be away from our jobs for a very long time. These details seemed very minor when we remembered how amazing it was to even draw a sheep tag in this unit.

October 14th finally came, and I set out to Fort Collins, Colorado to pick up Len. After that little detour, we continued on the next day to Montana. On the evening of the 15th, we arrived in Philipsburg and met up with Bill and his wife for supper. They were eager to tell us all they had seen while scouting for sheep. They had been looking the area over and came across a lot of sheep and a few rams but no shooters. These great folks stayed and hunted with us for the next three days, showing us a lot of beautiful country. It was truly breathtaking any direction we looked. The countryside was vast and full of many types of game – whitetail deer, mulies, moose, and elk. Every day, we also managed to see a lot of sheep. However, the drawback of this unit was that we had to cross private lands to get to the BLM and National Forest. We were so grateful that Bill had managed to take up that obstacle while he had been scouting. The landowners were great to Len and me by letting us pass through to get to the sheep. Of course, this meant we needed to hike 6-12 miles each day. The local ranchers told us November is when they see the bigger rams with the ewes come down to lower country. One day, after hiking north of our unit for about five miles, we found 180" rams just hanging around the homes there in Rock Creek Canyon. All we could do was drool and take pictures.

On the fourth day of my hunt, Bill and his wife had to go back to their home. We thanked them for all of their help, and Len and I headed out before daybreak into Rock Creek Canyon. We were on the prowl for a band of rams our scouts had found before we got there but had not been able to locate since. Len and I were set up with all of our spotting gear, starting to make out a band of ewes lower on the mountainside just as the sun began to break the horizon.

All of a sudden, Len looked at me, excited, and said, “There they are!”

I barely had a chance to ask what and where before he said they were the band of rams we had been looking for. Len was using a pair of 10-15x50 Leica binoculars on 15-power when he spotted the rams a short distance above the ewes towards the top of the mountain. They were in a little pocket where we could see them from a great angle. We zoomed in the 20-60x80 Nightforce spotting scope, and there he was with 11 other rams. We agreed he was by far bigger than anything we had seen.

As quickly as we could, we got ready with packs and rifles and began making our way towards them. Due to the terrain, we had to lose sight of them for a long time, all the while, hoping they did not cover enough distance that we wouldn’t be able to find them again. It took us a little under two hours to get to our intended location, even though we crawled the last 30 yards. We finally got a visual from above, and they were in the same pocket we had left them in before we departed from the bottom of the canyon. Len and I took one more moment to make sure we agreed which ram was largest. Then, at 130 yards, lying in the tall mountain grass, I shot my 184" Montana ram. I made the harvest with a 7STW Christensen Arms custom rifle.

The ram was 9 1/2 years old, and boy was he a great trophy. As we watched and waited for the other rams to walk off, Len and I high fived each other and then began taking pictures. I had a hard time believing this was not all a dream. Len and I caped the ram, deboned him, and started heading down off the mountain. It was a hard walk with that much weight. I tried carrying the head and cape, but it was too top heavy for me, so my hunting partner took that and the backstrap while I carried the rest of the meat.

This was one of my most memorable hunts. Hanging out with Len and my new friends made this once-in-a-lifetime hunt 70 even greater!