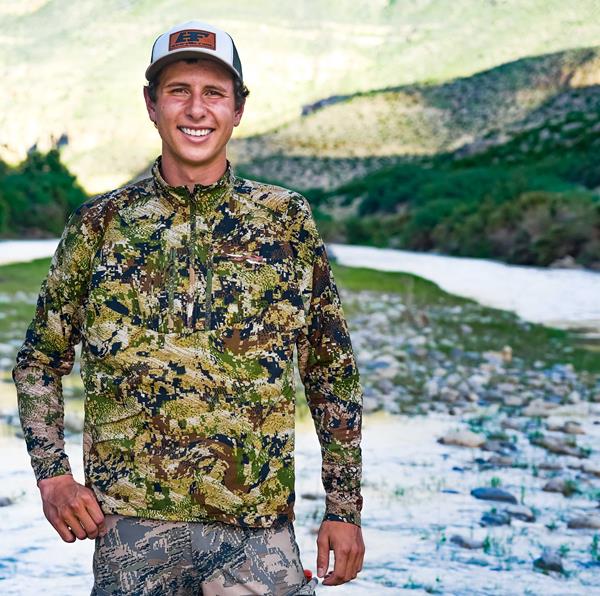 Video can be an exciting part of the hunting experience. It allows you to relive the memories of a hunt exactly as they happened. With that in mind, we recently added Brady Harang to the Huntin’ Fool Team. He is a professional photographer and videographer, and he’s helping us bring some excitement of the hunt to your computer and phone screens. Brady has put together a new series on our YouTube page called “The Advisors,” and it gives you some insight into a few of the hunts the Hunt Advisors have been on. Read up about Brady in our Q&A below, and then go to the Huntin’ Fool YouTube page to see some of the great work he is doing and to check out some great hunting content!

HF: Where are you from?
BH: Sitka, Alaska

HF: What are your favorite outdoor activities?
BH: Hunting, fishing, anything you can take a picture of, and snowmobiling.

HF: How long have you been a hunter?
BH: As long as I can remember, but I was unable to successfully harvest an animal until I was 12, right after I purchased my first gun with my own money. It was a Remington .308, and I harvested a nice little forkedhorn spike Sitka blacktail deer on the flats.

HF: How is the hunt different when you have a camera in your hand instead of a weapon?
BH: When I’ve got the camera in my hand, the focus is just as much on the hunter as it is on the hunt because I’m attempting to tell their story as well. I’m always running ahead, staying behind, getting different angles, and sometimes making mistakes that will blow our cover in an attempt to allow any audience to feel like they’re actually in the moment. That contrasts with when I have a weapon in my hand as my only concern is the animal I’m chasing and how I can complete that mission.

HF: What is your educational background?
BH: I did two years of business school, but I would really consider my education my previous attempts at a proper video. I started out filming snowmobiling that we did in Alaska and expanded my passion to doing some commercial work for a snow bike company near Bozeman, Montana. Snowmobiling is still one of my absolute favorite things to film because it’s exciting to watch and it’s one of the most freeing sports out there. Now, I’m lucky enough to get an opportunity to expand my filming subjects to hunting and beyond.

HF: What was the most difficult hunt you went on last season?
BH: The most difficult was the Desert bighorn sheep hunt I filmed because they live in such a harsh environment and blend in so well with the rocks behind them. They are extremely difficult to spot.

HF: How do you go about storytelling with your videos?
BH: That’s all done in post-production. When I’m filming, it’s in the moment, run and gun. Hardly any shots are planned. It’s all about what inspires me. In post-production, there’s a lot more time to review and critically think about where I want the video to go with what I have. I take a set amount of film and supplies and attempt to build as good of a story as I can out of what I’ve got. There are no second takes and no redos. The footage I have is what I have to work with, and the story I tell is the story that I can coach out of those shots.

HF: Why should people check out “The Advisors” videos?
BH: I think they’ll be appealing to all types of hunters because we worked very hard to not overdramatize and keep it relatable. Literally, it was me running around the woods with sometimes just one other person and staying out of their way as much as possible, simply documenting what was going on. I think it turned out to be a beautiful combination between cinematic video work and a good hunting story that doesn’t feel scripted or forced.

HF: What is your focus for “The Advisors” video series?
BH: I jumped into this job with no idea what I was doing; I was just ready to go. After getting to know the Hunt Advisors and everyone else on the Huntin’ Fool Team, I decided that I wanted to make this series into a realistic representation of every aspect of hunting, whether it’s mistakes, advice, and tips or exploring, having fun, and enjoying time with good people.

HF: How did you gather content for “The Advisors” video series?
BH: I followed the Hunt Advisors on as many hunts as I could and also went on some of our giveaway hunts that were with outfitters. Pretty much, I attempted to film everything that I could, beginning to end, which is easy when you are a part of every single moment from planning to processing.

HF: What did you learn from following the Hunt Advisors and guides on their hunts?
BH: I learned more than I ever would have guessed. My previous hunting experience consisted of hunting blacktail with a rifle in a condensed, dark forest. After going on our first archery elk hunt, I realized how different every style of hunting really is and how specific your approach needs to be for every landscape and every species. However, the single most important factor was planning. The animals will almost always be unpredictable, but the landscape never changes, the weather can be assumed, and the only gear you have is what you bring, so being prepared allows you the freedom to change your plan and still make an educated decision.

HF: Where can members find your videos?
BH: On Huntin’ Fool’s YouTube page at youtube.com/huntinfool, Huntin’ Fool’s Facebook page, and the Huntin’ Fool website. I hope members will take a look to see what we’re working on. Enjoy these videos and wait for what’s coming!

HF: What can we look forward to from you in the future?
BH: A lot more videos. I hope to tell the story of the Hunt Advisors better in the future. I’ll be going on more hunts with them and focusing a lot on showing their personalities and hopefully keeping the videos fun and entertaining while we have the time of our lives living the dream.

HF: Do you have any final thoughts?
BH: I feel really fortunate to have this job and can’t wait to expand on the awesome resources Huntin’ Fool provides their members.