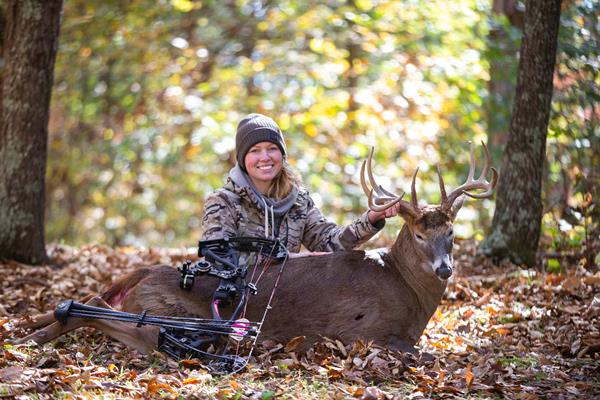 A while back, I asked my pops if he ever imagined me traveling all over the world to hunt, and his response was, “All you have to do is plant the seed.” He was referring to the gift of the outdoors and how he instilled a respect for nature and animals within me at a young age. His perspective is that if you introduce a child to the outdoors, they’ll always come back to it on their own terms. That’s just one of the many gifts he gave me. I don’t recall exactly when I started going hunting with him, but so much of my childhood revolved around the outdoors. He took me fishing more than anything, and one of my all-time favorite memories with him was just the two of us on the boat at our local lake. We were hybrid bass fishing, and every single rod bent over at the same time. We had bass on five or six poles total! He was hollering and telling me to grab a pole and start reeling with the biggest smile on his face. I was little, but I fought hard and helped him get them in the boat.

We spent many weekends at hunting camp, and eventually, at the end of middle school, I told him I was ready to shoot a deer. I think that’s one of the most important parts of my story, having a father that let me make the decision as opposed to pushing me to pull the trigger. He was patient and always made an effort to teach me new things when we were outside, regardless of if I was behind the weapon.

My pops was by my side for my first several animals, the first being a coyote, and after a handful of deer and pigs, he cut me loose. I began hunting by myself, driving that standard jeep from the cabin and walking into my stand alone at dark. I started to feel more and more confident in the field, which is so important for young girls in today’s world. He raised all girls and made sure we were strong, independent women, but I truly feel that the outdoors has a lot to do with that process. Nature has a way of teaching you lessons that even the greatest parent cannot; it exposes your strengths and weaknesses, while forcing you to make decisions. I believe that’s part of what keeps every outdoorsman coming back. We become better versions of ourselves through each pursuit.

Fast forward to 2012 when I met the man that would take my love for the outdoors a step further. I met Braxton during a summer internship at home, and he put a bow in my hand within six months as a birthday gift. It took hunting to a different level, requiring me to learn an entirely new skill and apply it in ways I hadn’t had to before. I practiced from January all the way up until season where I shot a doe on opening morning. I don’t think I’ve touched a gun more than a dozen times since, with the exception of hog hunting all over Texas in an attempt to manage populations. Being able to watch any animal in their own home without them knowing you’re there is pretty incredible, and I was slowly becoming a better hunter because I was learning more about them at less than 50 yards I could see, hear, and smell things I never could before. I could see every muscle in their faces move, and the coolest part was being able to watch how they interacted with each other. I was hooked. For years, I was curious about archery but wouldn’t dare step into a shop alone and I didn’t know how to get started. Then I met Braxton, someone who had almost exclusively bowhunted since he was 12. He became my hunting buddy, best friend, mentor, husband, and biggest fan. I was the lucky one, then and now.

After a couple of successful seasons, it seemed I was constantly running into women who were intimidated by the idea of bowhunting, even women who had already hunted! It mentally crippled them, and I saw myself in those individuals. I couldn’t help but wonder how many women were missing out on something so empowering all because of fear. I began to write about my adventures in August of 2015 in an effort to help those women. I then used my digital design degree, a B.S. in Visualization from Texas A&M, to build a company around those stories. I branded it “Followherarrow.” It grew quickly and helped connect me with thousands of women who had a desire to learn to shoot a bow or to start hunting in general. It also helped connect me with husbands and fathers who wanted to help the girls in their lives, which is super special to me because those are the exact two men that have taught me the most about the outdoors.

It’s through building that brand that I’ve had the opportunity to work with some incredible companies in the industry, which eventually allowed me to close the doors to my beauty salon that I opened right out of college and hunt full time. Since then, I’ve travelled all over the world on hunts I never thought I’d experience in my lifetime, with a growing desire to experience new and wild places every day. I will always be a Texas girl at heart, and while I have the most experience hunting whitetail, I’m far from great at hunting any specific animal.

I’ve been to Canada for black bear, New Zealand chasing tahr, Australia for fallow, and all through the states for various species. However, if I had to choose only one thing to chase for the rest of my life, it would be the magical sound of a bugle. Having a bull scream in your face at 20 yards just seconds before you let an arrow fly has to be the most exhilarating experience for a human. I blame my dad for that, too, because he took me on my first archery elk hunt in 2015 as a wedding gift and I tagged out on a great bull. Successful or not, I find joy in the memories made. Occasionally, the frustration of archery hunting will get to me and I’ll take a break to shoot some ducks, geese, or upland game with good company. In a nutshell, if I’m outdoors with friends, I feel like I’m truly living. I particularly like chasing first-time experiences. I guess I desire those unknown, foreign adventures.

I’ve always said that it only takes shaking one hand to change everything, and that’s exactly what happened with Huntin’ Fool. I shook the right hand at SHOT Show in Las Vegas. Shortly after, Braxton and I became members, which gave us a first-hand experience of their services. With the help of Hunt Advisors, we put in for more tags than ever before, drew several of them, and had one heck of a season. I wish I had found this company years ago so I could understand how the different state systems work and that you don’t have to spend a fortune to go on good hunts. That’s something I hadn’t fully grasped before I became a member.

When the opportunity came up to work at Huntin’ Fool, it felt too good to be true. I had dreamt of living in the mountains for years, and I always wondered if I’d have the chance to work for an outdoor company that didn’t interfere with my love of traveling and hunting. I’m so proud to be the Marketing & PR Manager for this company where I’m working to increase brand awareness through digital initiatives, maintaining our brand partnerships while simultaneously chasing new ones, and helping to distribute valuable information in creative, engaging ways. I want every partner and member to feel proud to say they’re associated with Huntin’ Fool. I want them to feel the way I did as a consumer and the way I do now as an employee. I feel very fortunate to be part of a team that wants us to be in the field and embraces our passion for the outdoors. I think the coolest part is stepping into a position with a team of extremely positive people who look forward to coming into the office and making things happen for our members and partnerships. It’s a contagious environment and has been a much easier transition than I expected because I’ve worked with so many of these same companies over the years from the time I started my personal brand in 2015. I think it’s safe to say this is by far the happiest I’ve ever been at a job. I look forward to helping this company grow and continue to help people go on more hunts with better information. I can’t wait to see what the future holds!