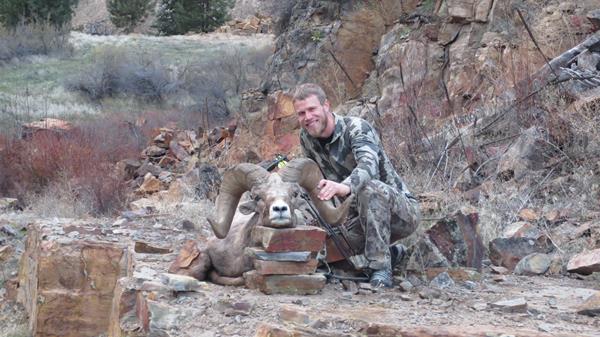 I’ve always come off the mountain with a better perspective than I had going in. Being away from the daily grind affords me the opportunity to gather my thoughts and realign my priorities. Time spent in the woods makes me want to be a better husband, dad, and person. It makes me want to accomplish hard things. It stokes my fire and fuels my dreams. It was five years ago as I was sitting on a windy ridge in Montana’s Cabinet Mountains, glassing for mountain goats, that I decided it was time to go after my dream job of becoming a hunt advisor. A few months later, with the full support of my family, I left my job of 15 years in the log home industry and started my own hunt consulting company. At the time, I had no idea the opportunity this decision would ultimately provide and that in five years my family and I would be moving to Cedar City, Utah.

As the newest Hunt Advisor, I’d like to tell you a little bit about who I am and where I came from. I was born and raised in Kalispell, Montana. I’ve been married to my wife and best friend, Sarah, for 10 years and we have a 5-year-old-daughter and a 3-year-old son. We currently live in the mountains in a log cabin that I built with my dad almost 20 years ago. It’s a place that has provided my kids the same setting that I had as a kid, a chance to grow up in the outdoors and develop an appreciation for the wild and all that comes with it.

As a boy growing up in the mountains of northwest Montana, family activities revolved around camping, fishing, and hunting trips. When I was old enough to tag along with my dad on his hunts, I did so every chance I could. With each passing fall, I grew increasingly excited about the next until I was finally old enough to be the proud owner of my first deer tag. I punched my tag on a small 4-point whitetail that, as far as I was concerned, may as well have been a new world record. I’ll never forget the sense of pride and excitement that came with taking that little basket buck.

My passion for hunting continued to build, and I did as much of it as I could in my teens, eventually falling hard for chasing bugling elk with a bow. The more I did, the more I realized I couldn’t get enough of it, so I began applying for hunts as a non-resident in as many states as I could afford. Each year, countless hours were spent calculating draw odds, harvest rates, and trophy entries. Although it was difficult at first, I began to enjoy the process of compiling and crunching the numbers almost as much as drawing and going on the hunts themselves. By the end of each application season, I had a pile of information that had served its purpose for me, but I wished it could have benefitted others as well. I began sharing my information with friends as they applied for hunts and the idea to start assisting others with their applications and hunt planning was born.

As the seasons have rolled by, I’ve suddenly been researching hunts for myself and others for 10 years and hunting for three decades. Success in the western big game draws has taken me all over the country, and I’ve had the opportunity to hunt muskox on Nunivak Island, Alaska, ibex in the Florida Mountains of southern New Mexico, and many points in between. I’ve been lucky enough to hunt moose, mountain goat, and sheep as well.

My favorite hunts tend to be spike camp type self-guided archery hunts. I’m drawn to the challenge of testing myself against the mountains and ultimately getting within archery range of an animal. The harder the hunt, the more gratification that comes in its success. I believe that the fruit of everything good in life begins first with a dream and then a challenge. Everything worthwhile is uphill, and it’s not going to come to you, you have got to go get it. This line of thinking was hammered home as I finally settled my pins on that Cabinet Mountains billy. Up to that point, there had been plenty of reasons why it was too hard and couldn’t be done with a bow. The thought of achieving success in that unrelenting country with a 40-50 yard range limitation was intimidating, even impossible if I gave it too much thought. I chose not to think about it and trust that the previous three months of shooting, conditioning, and scouting would eventually pay off and the chips would fall where they should if I stuck with it. As we walked up on that billy, the ensuing moments were surreal. I had given it everything I had, and the sweet balm of success never felt so good. I came off that mountain with a sense that I could do anything if I wanted it bad enough and with the momentum to take on my next challenge of becoming a hunt advisor.

I’m not exactly sure where this next chapter will take me, but I can promise to you, our members, that I’ll give it all I’ve got. At Huntin’ Fool, we’re big believers in chasing your dream hunts. Thoughts of once-in-a-lifetime tags and big bucks and bulls consume our thoughts year-round. We recognize that the research that goes towards which hunts to apply for as well as a solid plan going into the hunt are vitally important in the outcome of your hunt being fulfilled in the way you’d hoped. Whether it’s planning your first self- guided hunt out west or coming up with a hunt strategy that has you finally hanging your tag on that Boone & Crockett bull, I count it a privilege to be at your service and assist you in any way I can.