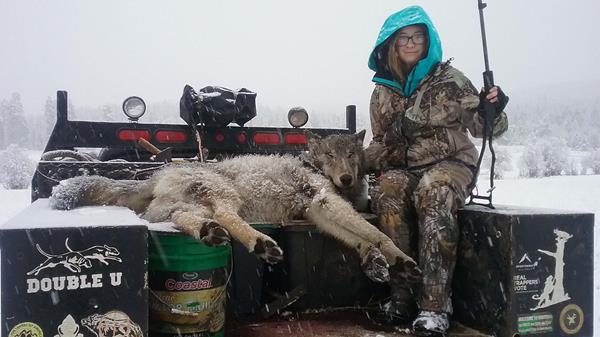 HF STAFF REMARKS "In the small town of Plains, Montana, there is a local wolf trapping legend—Dan Helterline. Dan dedicates his winter months to outsmarting these apex predators. I personally know Dan and understand the amount of time he puts into notching his five wolf tags each year while trapping. I hope you enjoy this article as you step into the boots of Dan Helterline as he breaks down what it takes to be a successful wolf trapper." — Isaiah Joner

Wolves – just the mention of this apex predator stirs many different emotions in different people. At one time, wolves were common all across the western and northern portions of the United States. However, due to the management style of our forefathers, wolves were effectively eliminated from most of the nation because of conflicts with livestock. Fast forward 100 years, and management styles have changed dramatically. Someone thought it would be a good idea to bring wolves back to our western landscape. Even though wolves were released into areas that had no historical evidence of them being there, it was labeled a reintroduction. Right, wrong, or indifferent, wolves were brought down from Canada and allowed to feed freely on our plentiful big game herds.

After wolves were released in several states, they had no problems populating and spreading to most of the states in the Northwest. When they reached population levels that were established by managers before their release, wolf management was supposed to be turned over to the states. Due to the emotional nature of managing wolves, delisting was held up in court for several years while wolves helped themselves to rapidly dwindling big game herds. They were very successful at reproducing unchecked, which allowed them to expand upon the landscape very rapidly. I honestly believe that had wolf management been turned over to the states as promised in the beginning, the resource and economic damage caused by wolves would have been far less than what occurred. Like it or not, wolves are here to stay, and in the West, including Montana where I reside, we have a fairly liberal hunting and trapping season for them.

It was in 2009 when Idaho and Montana opened the first hunting season after wolf reintroduction and many years of federal protection, but the following year, conservation groups won a federal case, restoring protection on wolf populations. After lengthy court battles in 2011, Congress once again delisted wolves and Montanans enjoyed their first wolf trapping season. My entire trapping career has been spent in Montana, so my wolf knowledge is Montana based. Montana offers some unique challenges that are not found in other places like Alaska and Canada, so there was a pretty steep learning curve when I initially set out to trap wolves. Some hunters initially had success calling wolves, but due to their incredible intelligence, they soon became call shy and even more difficult to hunt. Being a dedicated trapper, I decided that trapping would be my method of wolf harvest.

My first wolf season, I finished empty handed. Not letting my initial efforts discourage me, I sought out some professional predator trapping instruction from one of the country’s leading coyote trappers. I reasoned that wolves are similar enough to coyotes and some of that training and experience would be applicable to wolf trapping and increase my chances of success. I think my investment in professional instruction paid off as it increased my motivation and confidence tenfold and I went after coyotes and wolves with a newfound enthusiasm.

At the end of my second wolf trapping season, I had collected 2 wolves and 112 coyotes. I was very happy with my success. In all of my trapping, I’d never found something as thrilling as approaching a set with a wolf in it. This initial success fanned the flames and motivated me to learn all I could to be successful at trapping this apex predator. Learning curves can be greatly lowered by the right instruction, and my increased success is proof of that.

I continued to increase my wolf harvest each season, and it wasn’t long until I was trapping my quota of wolves each season. My daughter also went through the mandatory wolf trapping certification class, and that following winter, she trapped her first wolf at the age of 11, probably making her the youngest trapper to harvest a wolf in Montana. We were slowing making a dent in the local wolf population, and the deer and elk numbers were responding positively as a result.

In my seven years of wolf trapping, I’ve continued to learn more and improve my wolf trapping skills each year, building my confidence along the way. The best bits of advice I can give are to keep it simple, be patient and persistent, and never give up. One of the biggest challenges trappers face, in Montana at least, is keeping traps working through the winter in the freeze-thaw cycle that occurs all winter. Good quality waxed dirt and making sets in weather-resistant locations that intersect wolf sign will help combat this. Wolves have incredibly large territories and may only pass by a location once a month or less. Your traps have to be working when they come through if you are to be successful. Wolves need to be patterned, and sets need to be in locations where they will find them naturally in their travels. Wolves can occasionally be pulled to set locations, but it’s not easy. Keeping things simple, I use two styles of sets. Dirt hole sets are bigger and have more eye appeal than a coyote set, using a good quality tainted bait and quality gland lure. These dirt hole sets will typically catch the younger wolves as they are the most curious and have the lowest level of suspicion. The second set I rely on is a flat set. One type of flat set is a urine post set. This set relies on the territorial instinct of all canines and their inability to pass up a spot that another canine has marked without investigating it. Finding natural urine posts where wolves have already marked are the best bet. Enhancing it with good quality coyote urine and gland wolf or coyote lure is a perfect recipe to get a wolf to work a fat set. I also collect wolf droppings whenever I encounter them. They are a great enhancer at a flat set, especially if they are collected from wolves in a different pack. If you’ve ever watched your dog check out his buddy’s call sign left behind, you will understand why this is so effective. When you come by where a wolf has naturally marked in your travels, study where their feet were placed and that will tell you where to put your trap.

Wolves have the keenest of senses and are incredibly smart, so it is very important to make sure all of your equipment is clean and scent free. It’s impossible to illuminate all of your scent at a set location, but manage it to the best of your ability and keep your equipment free of foreign odors. Everyone has their own method of doing this, and there isn’t enough room in this article to go in-depth into how I do it, but keep it simple and don’t overthink scent control. All of my traps are anchored short with 18 inches of chain, a shock spring, and an earth anchor. This style of anchor system doesn’t allow a caught wolf to fight the trap as hard, eliminating lunging and levering against solid objects such as trees. Make sure to use quality urine and lure and have a variety of bait. I’ve had my best luck with beaver and muskrat meat as well as ground horse meat.

Pattern your wolf packs and make sets where they will naturally find them. Be patient and persistent and don’t give up. Wolves are difficult to catch but not impossible. I’ve yet to find something as challenging and ultimately rewarding as wolf trapping, so if you’re up for a challenge, give wolf trapping a try. In turn, you will give your local big game some much-needed relief.