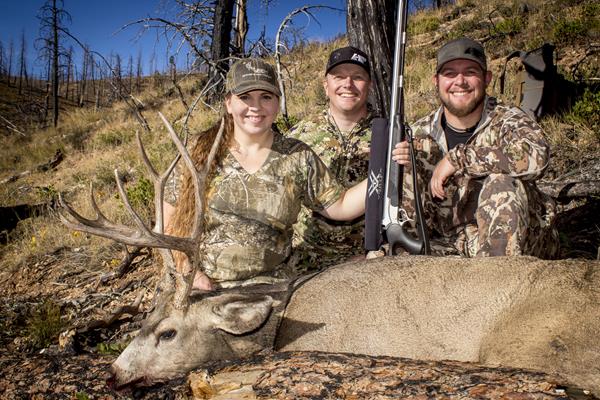 With good deer hunts getting harder and harder to draw across the West, hunters are searching out opportunities that are somewhere in the middle of the road between trophy and over-the-counter hunts. Utah has three different types of antlered buck permits that applicants can apply for – PLE (Premium Limited- Entry), LE (Limited-Entry), and GS (General Season) permits. The two differences between PLE and LE are the permit price and the buck to doe ratio the unit is managed for. Applicants are allowed to apply for either a PLE or LE permit and a GS buck permit, but you can only draw one antlered buck tag per year. GS units are managed for either 15-17 or 18-20 bucks per 100 does, which is more of an opportunity type hunt when considering that PLE and LE units are managed for 40+ or 25-35 bucks per 100 does.

Most of the LE hunts take at least 13+ bonus points to draw, with point creep pushing that number higher every year. On the flip side, GS hunts typically take 2-4 preference points to draw, and in recent years, these opportunity hunts have been producing some great bucks that rival any of the LE unit bucks. Part of the reason for this is that Utah has been leading the charge when it comes to habitat improvement, especially on GS units. The other part of the equation is that Utah switched its GS management from having 5 giant hunting regions to 30 smaller hunting units in 2012. We have been preaching to build points for these hunts ever since Utah transitioned over to unit by unit management from larger region management. For those of you who have built up a few general deer points and are wondering what these hunts are all about, hopefully this article will shed some light on just what these units can offer.

General Season deer units in Utah are more like general season deer units in Wyoming in that non-residents have to apply for them, but unlike Wyoming, Utah residents must also apply for them. There is a set number of permits for each unit, and in most units, those permits are divided up between the three weapon types. The ratio in which they are allocated is 20% archery, 20% muzzleloader, and 60% rifle. Since there is a set number of permits, Utah can better manage against certain areas getting overhunted like Wyoming’s region G and others that get hot as residents flock to those units until the quality goes down and they start to disperse into other areas. Utah has done a better job of mitigating the big swings in buck quality and hunter crowding than other states have when they take a statewide approach to general deer management. The result is a better understanding of what you are getting into when you apply for one of these hunts. The management structure for having two different buck to doe ratios for GS units is to provide ample opportunity to all hunters, whether you want a better chance for a mature buck or to simply fill the freezer. Harvest success tends to lean in the 18-20 buck to doe ratio units a bit, but overall, it is pretty even across the board. The amount of mature bucks harvested off of the 18-20 units is higher on average, which is to be expected, but a great buck can come from any of these units.

The landscape and densities vary widely across state, which can both help and hinder your decision in eliminating units to apply for. Typically, units along the eastern and western borders of the state have lower densities along with lower permit numbers, which for the glass half full guy means lower hunting pressure and a more enjoyable hunt, but for the glass half empty guy, it means fewer deer and less opportunities. From center north to the southwest part of the state, you will find the highest densities of deer along the I-15 corridor. Along I-15, most of the high elevation, mountainous units are on the east side and the lower elevation, brushy country is on the west side. Both areas have high deer numbers along with high numbers of permits.

Historically, the GS hunts have always had the same season dates for archery, muzzleloader, and rifle, that is until this year. The main archery hunt is a 28-day season that typically runs from mid- August to mid-September. Utah has an extended archery season along the Wasatch Front that runs September 15-November 30. The muzzleloader hunt is a nine-day season that runs from late September to early October. This year, in seven units, there was a new five-day rifle season the second week of October and all general units had a nine day rifle hunt the last part of October. The typical rifle hunt held in late October has always been a wild card. This hunt is held during a time when most mature bucks are very difficult to find and some deer have begun their winter migration and are somewhere in between winter and summer ranges in secondary ridges. These are typically the hardest areas to hunt deer in as they are in the thickest cover or nastiest canyons they could find. We will have to wait and see how these early rifle hunts are for locating mature bucks. My initial thoughts are that with these bucks still being somewhere close to where they spent the summer, it should make scouting a lot more beneficial in locating them. However, when you take a closer look, these hunts are conducted during the General Season elk hunt, which will increase the hunting pressure immensely and could push older bucks into hiding.

The archery hunting in Utah has really taken off in terms of mature bucks being harvested in the last 10-15 years. Part of this is due to the dedication to archery hunting and the advancements in archery and rangefinding technologies. Another part is due to advanced and refined efforts in baiting (which is legal in Utah) these mature bucks into a predetermined location. As any bowhunter knows, the odds weigh heavily in the hunter’s favor if they can keep their movements to a minimum until the animal is within range. This form of hunting is always a hot button issue, but the fact is that it is a very effective way to harvest target animals and it is a big reason for the influx in archery hunting in Utah as well as the elevated success on mature bucks hitting the ground.

General Season hunts in Utah are as good as they have been since I can remember for both quality and quantity of deer. Buck to doe ratios are good, harvest success is as good as it has ever been, and populations are on the incline. As crazy as it sounds, I would rank these GS deer hunts in Utah up there with deer hunts in western Colorado that require 0-4 points and max point units in Wyoming for average trophy potential. Take a look at the table provided to figure out which one of these units is right for you. If you are already applying in Utah for LE deer, you need to be applying for and hunting GS deer right now.