Brains vs. Braun Part 2: Elk Move, So Should You 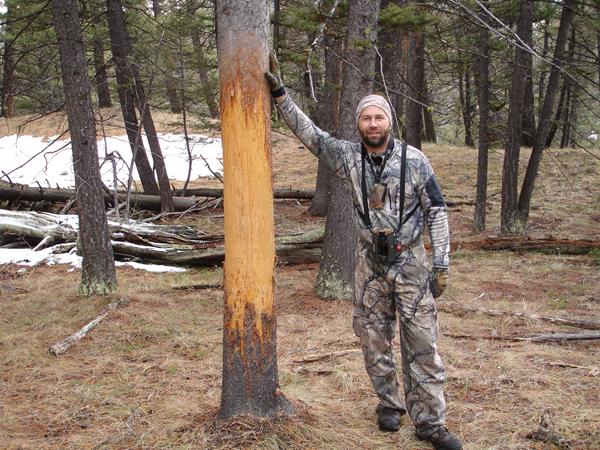 In a former life, I provided technical support for archery products to customers who were having trouble tuning their bows. Those conversations often evolved into archery elk hunting discussions, and a few of them left lasting impressions on me. Some gave me new ideas to try, and others left me stunned at how hard some hunters worked at doing the wrong things with terrible results. One call that illustrates the point I want to stress in this article was with a guy who had been traveling out of state from California to Oregon for three years on 10-day self-guided archery elk hunts with some buddies. He confided in me that he was frustrated that in nearly 30 days of hunting prime elk rut dates, his hunting party had only heard one faint bugle in the dark and that they had only seen a handful of cow elk with a spike bull or two. Doing my best to not sound incredulous, I bluntly told him that he was either hunting a terrible spot or he wasn’t hunting it right and that there was no reason to ever go for three years and not be into more elk than that. I gave him some new areas to check out and a few basic techniques to employ when he was unable to find elk and figured I’d never hear from him again. Lo and behold, the next year, he called me back, beside himself with excitement at how good archery elk hunting could be. Not only did they kill a public land over-the-counter bull, they were also in good rut action for the entire hunt.

Unfortunately, it is pretty common for hunters to become overly attached to certain spots, units, and hunting styles. This is often at the expense of expanding their hunting horizons. I’ll admit that finding elk can be tough on any hunt, but I truly believe that whether you are hunting the best limited-entry draw tag in the state or an over-the-counter tag with hundreds of other archery hunters, there is no excuse to not find elk. They are relatively easy to glass, they make a lot of noise during the rut, and they smell strong enough that even our poorly evolved human noses can pick them up days after they have hung out and rutted in any given spot.

More often than not, the main reason that elk can’t be found is because hunters aren’t mobile and flexible enough. Elk are nomads, and if you’re not prepared to roam to locate them, you may find yourself creeping around a basin that is filled with rubs, wallows, and sign wondering where the party went. Meanwhile, the elk that left their mark in that canyon could be in another state by now. With that in mind, I try to create a hunt plan that provides me the opportunity to cover the greatest amount of country in the least amount of time. I start with my pickup truck and then work my way down through ATVs, motorcycles, E-bikes, and mountain bikes and then I eventually wind up with boots and hooves as my final considerations.

I know that this may sound lazy, but this article is focused on how to find elk, not how to lose 10 pounds on an annual “armed hiker” crusade. Before I am crucified by the backcountry aficionados, I will say that backcountry elk hunting is both fun and rewarding and it can be an excellent way to get away from the crowds. However, that style of hunting is very “all in” and doesn’t afford the backpacker much of an opportunity to relocate if the chosen basin is void of elk. The reality is that your boots are the slowest mode of transportation you have at your disposal, especially when compared to elk hooves. For that reason, I try to rely on them once I have an educated guess on where elk are versus using them to wander the woods aimlessly.

Regardless of the mode of transportation, I’m looking for three major things as I cover ground:

With good optics and decent conditions, you can identify elk at 10+ miles away. You may not be able to size one up, but at least you know where elk are and you can close the gap to a more adjacent glassing point to decide if the bull you want is in the particular herd. For this reason, finding glassing spots is always my top priority. Once I have identified glassing points that enable me to see into remote pockets that are likely to hold elk based on the terrain, elevation, and vegetation, I start putting together a plan of attack on what order to prioritize the glassing points in.

First and foremost, I consider the direction and time of day I’ll be glassing because I want the sun at my back if at all possible. I also identify the elevations that the glassing points are located at because if a low cloud ceiling or fog rolls in, I want a backup plan for lower altitude glassing points that aren’t rendered useless by bad weather. Finally, I take into consideration how much time I’ll need to invest to get to the glassing points and how much country the glassing point exposes. I’ll work harder and longer to get to a point where I can see a ton of country in a large radius around me than I will for a vantage point that only lets me get a small peek at elk habitat. I will plan on sitting these glassing points for the first couple of hours of daylight and the last couple of hours of evening on a daily basis. If I’m still struggling to turn up elk, I will move to my nightly location routine.

It’s no secret that heavily pressured elk are more likely to bugle at night than during the day. As long as it’s not so windy that I won’t be able to hear, I will drive roads, hike ridges, mountain bike gated roads, and in general travel as much country as I can in the dark listening for bugling bulls. Essentially, I strive to become as nocturnal as I can be during elk season because I know my odds of finding elk go up when my sleep schedule matches the elk. On many occasions, I have found a brandnew pocket of prime elk habitat in the cover of darkness that I otherwise would have never even considered.

Although I typically discourage using calls, I make an exception at night. Elk are definitely a different creature once darkness descends, and I’ve had bulls bugle at me before the engine has come to rest. With that being said, I like to stop and listen for a few minutes before I make any noise. When I do, I prefer a bugle. In my experience, bulls are more vocal than cows at night, so I’m simply trying to fit in and follow the communication rules elk live by.

As archery hunters, one of our most important skills is our ability to observe and read wildlife sign. Like I stated in the beginning of the article, elk don’t live a small life in the woods like some animals, so employing this skill on as large of a scale as possible should be paramount when trying to round elk up on a hunt. Personally, I cover a lot of ground by driving, biking, or walking roads, trails, and ridges, looking for sign. I also glass for tracks and fresh rubs while I am glassing. Elk tracks and trails can be seen from miles away in a patch of snow or on a muddy hillside, and a fresh, shiny elk rub stands out like a sore thumb from great distances, but only if you’re looking for them! On many occasions, I’ve been able to turn up great little pockets of elk habitat simply because I reminded myself that there is more than one way to spot an elk.

By remaining mobile and flexible in your plan, you will turn up more elk than any hunter who thinks that sticking to the plan is more important than planning to be flexible from the start. I’ll use an example of another individual I met in the field where this strategy rings true. I was hunting the Missouri Breaks in Montana where I had hunted for many years, and like always, my 2012 plan involved a starting point that I anticipated would not be my ending point. In 2011, I had camped in a location that was loaded with elk. Bulls could be heard screaming throughout the night, and we killed a couple of elk nearly within eyesight of my camp trailer. Naturally, I was excited to roll back into the same spot the following year and have the same experience. What I found was an elk desert.

We turned up a couple of bulls in the first 24 hours we were there, but they were small and there were very few cows present. Equally important, we did not hear any bulls at night when we drove around the adjacent area. On my second evening hunt, I bumped into an archery hunter who reported the same results. The difference between us, though, was that his group had been hunting the same spot for the last seven years. Furthermore, they had been camped here for more than a week and had only seen a couple of small bulls. The longer we chatted on the ridge, the more I was reminded that elk hunters get too committed to their plan. Their large hunting camp was all getting skunked, yet they were not willing to relocate. I even asked him if he had considered pulling up stakes and moving to a new area and he looked at me like I was crazy. Needless to say, I could not get back to my camp trailer fast enough to relocate.

I was packed up and on the road within an hour after dark, anxious to find a new place to base out of. As I traveled the unimproved roads with camp trailer in tow, I periodically stopped, got out of my truck, and listened to hear if I could find any bulls bugling. An hour and a half or so into my night drive, my ears were greeted with the welcome sound of a frenzy of bugling bulls not far from the main road. I found the nearest camping spot that wouldn’t put me too close to this pocket of elk and set up my trailer. Two days later, I killed one of the biggest bulls I’ve ever killed in the Missouri Breaks in a spot I had never even considered hunting prior to that.

The longer I have hunted elk, the more convinced I am that the best asset I have in my arsenal is my willingness to call an audible when the elk are not cooperating for whatever reason. Wolves, wildfires, overgrazing, hunting pressure, and more all collectively work to change the landscape of any particular elk hunt. If you will take several backup plans with you into the field and a commitment to remain flexible, you will turn up more elk than any hunter who won’t. Whether you are on a premium limited-entry tag or an over-the-counter hunt with hundreds of competitors in the field, this remains true. In next month’s issue, I will cover actual archery elk hunting strategies, including calling, spot and stalk hunting, and more.