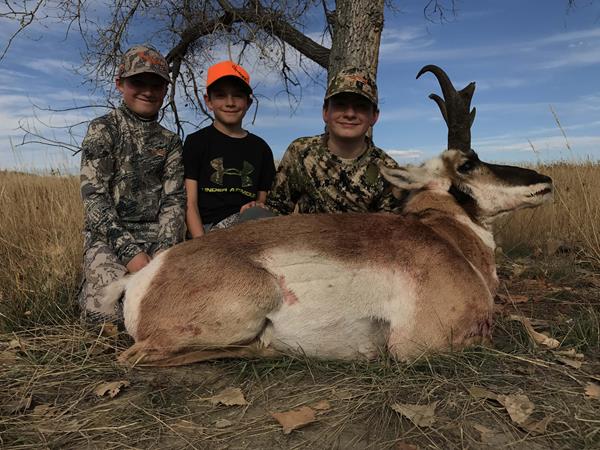 When planning out their hunting season, most hunters don’t give much thought to antelope. The applications are filled out with ideas of big bucks and bulls and dreams of drawing a sheep tag. Antelope may be easy to overlook when putting in for tags, but I love hunting everything and can’t imagine a year of not chasing antelope. My 2017 application strategy accounted for this, and I wanted to plan a few antelope hunts where I could bring my family along.

After looking at my antelope point levels across the West, I knew Oregon, Arizona, and Nevada were going to be long shots. I applied for the better units in those states but did not hold my breath. Being a Montana resident with a couple of points, I figured my best chance of drawing a tag would be in Montana, so Amy, Connor, and I applied as a party for unit 700. Having three points in Wyoming, I decided that if I applied in the special draw I would have a chance to hunt a unit with decent public land access. I chose a unit that I felt I would have a solid chance of drawing and applied. So far, Idaho has always been good to me, and my biggest antelope was harvested there. I have been fortunate enough to draw two Idaho rifle antelope tags in the past, and I knew most units offer an unlimited amount of archery tags. Since 2017 was going to be a busy season, I decided an early season archery hunt would work best. I applied for a limited archery antelope tag as my first choice and followed it up with an unlimited tag as my second choice.

Once the draw results came out, my family had five antelope tags altogether. We drew as a party in Montana, and I drew my Wyoming tag and unlimited archery tag in Idaho. Unfortunately, the units I was going to be hunting in all three states were checkerboarded with public and private land. I picked up the Elite membership from onXmaps and downloaded their app onto my phone. When you have this membership from onXmaps, you can update any of your state chips for your GPS. I truly feel onXmaps has been the biggest advancement in hunting technology since the laser rangefinders. I updated my chips for Idaho, Montana, and Wyoming, so both my phone and GPS were all ready to go.

My first antelope hunt of the year was going to be my Idaho archery hunt. I planned on hunting some remote country in the Owyhee desert where years ago I had killed a big buck with a rifle. I figured the further I could get from Boise, the less hunting pressure I would find during this unlimited archery hunt. I spent a lot of time researching the unit and decided I would set up a ground blind on a waterhole. I knew of a remote waterhole that held a good number of antelope, and as an added bonus, the road ended about half a mile before the waterhole. After a little research, I picked up an Apex ground blind from Xenek, and before I knew it, I was headed to Idaho to meet up with my cousin, Cody Draper. We made our way out to the desert and set the blind up the morning before the hunt and then spent the rest of the day scouting.

On opening morning, I was in the blind an hour before daylight. As the sun began to rise, I was met by sage grouse flying into the waterhole, followed by a handful of mule deer. The next 12 hours dragged on without anything showing up, but just as I was considering calling it a day, a dozen antelope showed up to the waterhole. To my amazement, the buck left his does and presented me with a perfect shot at 22 yards. My shot was good, and the buck ran off into the sage. I couldn’t believe that in just a few moments I had taken my first antelope of the season with my bow.

My second antelope hunt took place in Wyoming, and I felt blessed to have my youngest son, Colter, join me on this adventure. We loaded up the truck with a bunch of unhealthy snacks and headed for Wyoming, arriving at our unit well after dark. We found a small piece of BLM land and camped that night in the truck. As daylight arrived, I was able to get a lay of the land and immediately started seeing antelope. Unfortunately, it was also incredibly windy that morning, so Colter and I decided to drive around and learn the area better. One thing I have learned about hunting is that things can always change quickly, and Colter spotted a small herd of antelope feeding in a big cut sheltered from the wind. After making our way closer, we discovered that there were 80+ antelope in a small valley out of the wind. With so many antelope, we reasoned that there had to be a good buck, and, sure enough, after looking them over in the spotter, we found a shooter. Colter and I carefully made our way down to the herd and were able to set up within 300 yards for a shot. Once our ear protection was in place, my Christensen Arms rifle broke the silence and we had a nice buck to take home. The Wyoming buck was better than I had hoped for, and he ended up being the second largest antelope I have ever taken.

The last antelope hunt was in Montana, and I had planned to take the whole family. Sadly, Amy was unable to take the time off from work, so I decided to take the boys and hotel camp for this adventure. Seeing how we had no private land access and did not have any reservations on Block Management lands, we decided we were going to cover country in the truck and hunt any BLM or state land we could find by using our GPS. If you have never hunted with boys ages 8, 10, and 12, you are missing out. Honestly, I do not think I have laughed that hard in a long time. Luckily, they all had their own binoculars, but the fight came over my phone and GPS. They loved using onXmaps to see where we were and when public land was coming up. They were not keen on sharing, so I set it up for them to rotate devices every 30 minutes.

Late on the first day, we found two bucks working their way along the Powder River. It was a fun stalk with all three boys sneaking along the route we had planned. We made it to within 200 yards, and Connor made a great shot, taking his first antelope. Since we were not seeing many antelope near the Wyoming border, we decided the next day to head north towards Jordan, Montana. Just south of Jordan on some BLM land, I spotted about 30 antelope, and it looked like there was a good buck in the herd. The antelope changed direction at some point during the stalk and we came up on the top of the hill at the same time as them. I spotted my buck off to the right of the herd and took a quick off-hand shot at 30 yards. Just like that, our last antelope of the year was on the ground.

Antelope hunting is a blast, and with there being a lot of easy tags to draw in the West, sometimes it pays off to think outside the box and hunt areas that do not have a lot of public land. With the technology available from companies like onXmaps, you can easily find public land areas to hunt. Even though they may be easy to overlook when applying for tags, don’t underestimate how much fun antelope hunting is and how many tags are readily available if you take the time to apply.