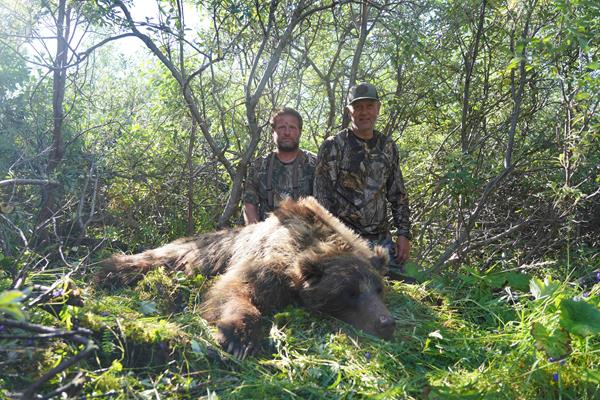 Do you ever just know you’ve been on one of the best hunts of your life? After an adventure in Alaska this year, I’m certain I have. I live in Southwestern Minnesota and have been on several out-of-state hunts for many species over the years. I apply for various preference points each year, and sometimes I’ll toss my name in the hat for a “Super Tag” or Huntin’ Fool Membership Drive. Thus, when I saw a float hunt in the Arctic with Alaska Outfitters Unlimited offered via Huntin’ Fool, I knew I had to buy an entry.

I was awaiting a medical appointment on the day of the drawing. That’s when I saw my phone indicating an incoming call from Cedar City, Utah. We all know that Cedar City is the phone number that pops up with the Huntin’ Fool calls, and on drawing day, my anticipation probably caused an increase in my blood pressure. A call back a few minutes later confirmed that I was the winner of the combo float hunt for grizzly bear and caribou with Alaska Outfitters Unlimited.

For me, hunting has always been a social affair. I really enjoy being able to hunt with my friends, so I immediately began my search to find someone willing and able to accompany me on this hunt. My good friend, Kurt, was that willing and able person. We later agreed that I would hunt for caribou and he would hunt for a grizzly bear. I’d previously hunted for a grizzly on a last-minute “cancellation” hunt. What was more important was that Kurt would be a part of this special hunt.

July 27th found Kurt and me loading gear into a bush plane, preparing to fly to our initial hunt camp about 300 miles northeast of Fairbanks, Alaska. Eventually, we landed and set up camp, and what a great camp it was! Hunters had their own tents, and there was a single larger tent that we could share as a group if the weather was poor. Camp came complete with chairs, tables, a stove, and the much- needed Thermacell bug repellent. Hunting rules in Alaska dictate that you cannot hunt on the day you arrive at camp, so we lounged, tried our hand at fishing, and enjoyed the incredible views.

For the next couple of days, we’d hike a few miles to various heights from which we’d glass. We were only hunting grizzly at this point because the caribou season hadn’t yet opened. On the very first day, from a distance, we spotted a sow grizzly with two cubs as well as a pair of what we thought were younger bears. Just watching them was enjoyable. We were also blessed to see a wolf and a couple of moose.

On our second day, our guide and owner of Alaska Outfitters Unlimited, Aaron, spotted a nice boar feeding on blueberries far above our elevation. We began a stalk, although the air was lifting our scent upward. We hoped the rising thermals would follow a separate ridgeline than the one we were on. We were wrong, and it wasn’t long until that bear was gone. We caught a glimpse of one other bear that day, but it was too late to begin a stalk.
On the third day of our hunt, we climbed to our glassing location but didn’t see any bears in the morning, so we decided to pack up camp in the raft and do our first float. We floated for about three hours down the river and then set up camp again. That night, we glassed from the top of a little hill and saw nearly 100 caribou, but there was only one nice bull in the group.

Early the next morning, I was up and standing by the river at about the time a wolf was walking along the same river just 100 yards away. I was starting to think that it was a good thing I had a wolf tag in my pocket, although the season didn’t open for another day.

On day five, August 1st, both caribou and wolf seasons opened. I had purchased a wolf tag since the season was open and could be added on to the hunt. We glassed near our camp, but most of the caribou were gone. Just a few cows and calves were moving around. Our plan was to float downriver that day, so we packed up camp and got the raft loaded. We’d only gone about a mile down the river when Aaron spotted a black wolf up on a high riverbank, directly perpendicular to our raft. Aaron beached the raft as I grabbed my rifle. Soon, I was situated with my bipod on a ridge. It felt strange shooting at that extreme angle uphill, but Aaron had estimated the range at 250 yards. I took the shot, and the wolf went down. This was the first wolf I’d killed.

As we reached the top of the hill to retrieve the wolf, we turned to see another wolf chasing a couple of caribou below us. We watched them run for about a mile on gravel bars and swim channels of the river. I wished I’d brought my rifle up that hill. I’d already told the guys I’d use my caribou tag on either a caribou or another wolf.

With photos taken and the wolf loaded on the raft, we resumed floating downriver. Only a few yards downstream, we saw the other wolf, a white specimen, chasing a single caribou. We slid the raft near a gravel bar, upon which I lay down to take a shot at the wolf. When it paused at the river’s edge, I took my shot and another wolf went down. We gathered the animal and continued our float until meeting up with another guide and client with whom we’d camped the first couple nights. We decided to float the upcoming rapids together for safety’s sake and in case either of us needed assistance.

After clearing the rapids, we spotted a nice bear high above us and far away. The rangefinder said it was about 1,700 yards up the bank. Gluttons for punishment, we decided to go after it. An hour and a half later, we’d climbed the hill and the bear was gone, so downhill we went back to the raft. Eventually, we made it to our third camping spot, “Whale Mountain,” and set up for the night.

The next morning, we glassed near our camp and worked on the two wolf hides. We knew it was a day for some rest and to catch a few Arctic grayling for supper that night. The fish were delicious. We spent a couple days at this camp, walking along the river while looking for bears. No bears were seen, but we did get a glimpse of a couple of rams on a green slope.

After three days, we broke camp and began a float downriver, heading to “Caribou Pass” where the annual migration sees some 250,000 caribou pass through each year. As we pulled the boat onto shore, Aaron spotted a bear on the other side of the river about 1,400 yards away. We quickly unloaded the raft, pulled on our waders, and pushed our craft across the river, paddling in one deep location.

We donned our waders as we began the stalk. We would lose sight of the bear as we climbed the bank, but the wind was in our favor the whole way. About 320 yards out, we spotted the bear again. We paused to consider our situation and then chose to get a little closer, waiting until the bear was out of sight. We moved to within 270 yards when the bear came into view. Using packs for a gun rest, Kurt got ready. When the bear turned broadside, a shot rang out. It was a hit, but the bear kept moving. A second shot dropped the bear, but it was able to rise again, and it lumbered into the willows and alders by the creek.

We took the opportunity to remove our waders, cooled down, and then crossed a creek to the side of the bear and climbed a hill to get a better view. After about an hour, Kurt and Aaron started down the hill with guns at the ready. I stayed atop the hill and acted as a spotter. When the two neared the river, the bear was on the move again. Two more shots were fired from the .300 Weatherby, but the bear started to head toward Kurt and Aaron. With an open shot at 15 yards, Kurt was able to put a finishing shot into the animal’s chest. We really could have done without that excitement.

We took photos and started skinning the bear right away. After crossing the river and bringing it back to camp, we set up and rested. It was a beautiful evening, and we sat outside until nearly midnight. In this part of the world in early August, it’s never completely dark. The following morning, we broke camp and packed up for the bush flight.

It had been an incredible trip. Our guide, camp, the weather, and the views were tremendous. As other hunters say, Apply, Apply, Apply! for these hunts. That’s the absolute truth, and Kurt and I got to experience a hunt-of-a-lifetime because we applied. Many thanks to Alaska Outfitters Unlimited, Kurt, and Huntin’ Fool for a great trip!