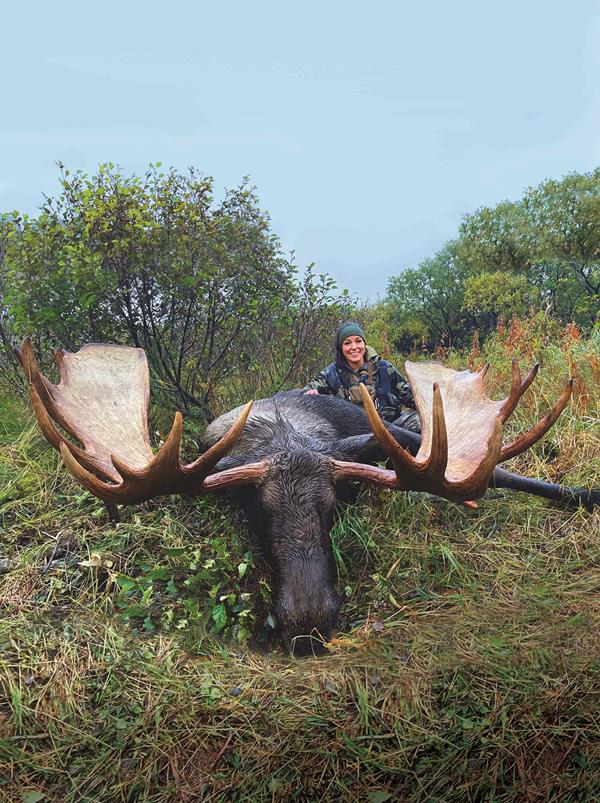 I invited my good friend, Alishia Zemlicka, a resident of Montana and experienced archery elk hunter, to do a self-guided Alaska moose hunt with me. I don’t invite many people to hunt Alaska, but Alishia is one of those people who is strong, tough, and a really accomplished hunter.

We went into the hunt knowing we both had tags, but I wanted her to be the first shooter. We were dropped off by a Super Cub in the middle of nowhere in a rainstorm and set up our camp before dark. Something felt odd about this place, but we knew some monster bulls were hanging out in this creek.

Opening morning for Alishia, she was determined to get a bull with her bow. We left the tent at first light to chase after the monster when we met a little bull at 25 yards unexpectedly. He was downwind, and we weren’t even calling yet. He heard us, saw us, smelled us, and wouldn’t leave or walk by. At first, he didn’t seem aggressive. He was pacing in front of us, eating and looking at us. We tried to walk around him and back away, but he cornered us against a creek at 15 yards and squared up to aggressively rake a bush to fight. I drew my pistol and yelled as my rifle was still in my pack. I figured he was just challenging us and we needed to get distance. He kept herding us and kept us cornered under 20 yards. He put his head down to do his fight presentation again. When the brush was covering his face, we snuck around him upwind again out of sight and quickly got distance. We thought we were in the clear, but I had a feeling he was still coming. Alishia strapped her bow to her pack so we both had two hands in case things got western.

When he realized we were gone, he followed our tracks and came right into our wind. He booked it on a string. We tried sneaking away, but he was closing distance on us fast. We ended up at the creek that was neck deep to cross in the wide open and had nowhere else to go. He had us pinned, and this time he wouldn’t stop. Now 40 yards and coming fast, I yelled, but he came harder. I fired a warning shot at 25-30 yards. That really angered him. He put his head down, pinned his ears back, and came right for us. My rifle was still in my pack, but I stayed super calm and let him get very close. I waited until he was 15 yards away and only had three more strides to trample Alishia before I started shooting. He didn’t even flinch. He took another step. I fired one into the lungs, but he still didn’t flinch. I followed up with the last shot into the spine and dropped him 8 yards from Alisha’s feet. I instantly felt immense relief.

We ran back to camp and were shaken enough to call in backup via my husband who would have to fly in. Though I shot the moose in self defense, to avoid the investigations and paperwork that come with a DLP, I tagged and packed out the bull as I had an “any bull” tag. I guess we really could focus on just Alishia now!

We tried to hunt that spot the next day but had no way to see the monster bull unless we could walk up on him within 50 yards in the alders. It was too windy to call and locate him, and we had bears along with a carcass nearby and some PTSD. We ended up moving locations the following evening and set up a new camp in a new spot. It would be a difficult place to hunt, but I had found some big sheds there in the past and had been scouting a few big bulls nearby in the early season. In short, it was a spot I had always wanted to hunt, but I knew even the most seasoned hunters would probably pass due to the hiking conditions. We knew there would be zero hunting
pressure at least.

We knew some cows were on the mountain, and before dark, we spotted a nice bull in the spotter over one mile away. He looked fairly big from what we could see, though he was standing in the alders. We set up camp in 40 mph winds, and a big storm hit by dark.

The next morning, Alishia instantly found his paddle sticking up above the alders right before first light. We both decided we didn’t desire to be super close to a moose again, so she left her bow at the tent and took the rifle. We closed the distance in the dark to half a mile so. When we could see better, we could make our move. We kept him in our sights, and he was working his way toward us, so we kept moving in, keeping the wind just right. When we got within 400 yards, we saw one last glimpse of his points above the alders and he disappeared. I tried raking and cow calling, but we could not see the bull. We backed out when our wind got swirly and glassed for the rest of the day. He did not show himself by dark, so we went back to camp and hoped to find him the next morning.

The next morning, we had fog to the ground and a lot of rain. We waited out the weather, and the fog lifted just enough to see the base of the mountain. With constant heavy rain squalls, we set up our glassing tarp on our camp ridge to locate the moose and try to stay dry. I spotted the cow nearly another mile from where they were the previous day, so two miles from camp. Alishia was not thrilled to see them that far away through muskeg swamp. I knew the bull had to be close. We found another bull moose closer to camp, but he was questionably legal.

As afternoon hit, the nastiest weather hit with monsoon rain and winds, but we could still see. I was eating a snack under the glassing tarp when Alishia yelled, “There he is!” He stepped out into the open from behind the alders following the cow. He flashed his huge plywood paddles at us from two miles away.

Our wind was strong and we were upwind, so we circled two miles around the mountain to get downwind of the moose. We were now roughly one mile away in the late afternoon. With only a few more hours of daylight, we decided to take the risk and go for it. In order to get there in time and move quickly, we had to leave most of our gear and go in light.

We started closing the distance and kept eyes on the bull the entire stalk. He was on a mountain face surrounded by willows and alders, so I knew we would have to shoot him long range. We set up on the closest ridge we could get to, which was 550 yards from the bull, and he bedded with his cows. This would be Alishia’s first long-range shot on any animal. She is a very well-versed archery hunter but new to rifle hunting, so we took our time to get set up and very solid with the Gunwerks 338 RUM. It was pouring rain so hard that we could barely see his paddle through the mist and fog. The gusty crosswind would make this shot even more difficult. I coached her through all the logistics of the shot, the wind, and the setup.

We started violently shaking once we stopped moving. I knew I needed to get this bull to stand up quickly before it got dark or hypothermia set in, but I doubted he could hear me in the howling wind. As a last resort, I cow called and he turned his head but did not get up. I cow called again, and he perked his ears up and then laid back down. I cow called a third time. He got antsy for a few minutes and finally stood up for a perfect broadside shot above the willows. “There’s your shot, Alishia. Shoot!”

She shot through the sideways rain and hit him perfectly just behind the shoulder. He stood there, barely moving, but he was surrounded by alders which are hard to track moose in, so I told her to shoot him again. She hit his spine and dropped him in his tracks. We watched him after 30 seconds flip over backwards and then we saw no more movement in the brush. She had a big bull down!

Conveniently, my husband, Adam, was on his way to our camp in the Super Cub just before dark to hunt with us the following day. I messaged him on the inReach and told him we had a big bull down, but we were two miles from camp and would like to have a closer pack out spot. He landed shortly after, and thankfully, he found a spot just half a mile from the bull which would cut our pack way down from what it originally was.

We walked up to the bull, and Alishia was in disbelief at how big he really was. We measured him at 71 1/4" and he scored 228 1/8", which is bigger than any bull I have shot. It was now dark, so we ripped the guts out, hiked two miles back to camp in the pouring rain, and did not get to sleep until 2 a.m.

We had a stellar hunt with a surprising start and a triumphant ending despite horrible weather conditions. I have been on a lot of tough Alaska hunts, and this moose hunt was very hard, too, with some of the most challenging muskeg tundra I have ever walked in. In Alishia’s words, “I’m in really good shape. I do Cross Fit five days a week and compete at high-level competitions. Even at that level, I still got my butt kicked in Alaska.” With two bulls by two women in four days, we knew it would be a tough hunt to beat.