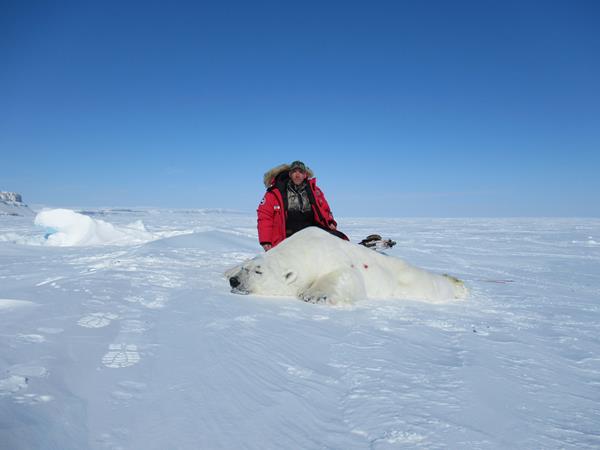 I received a call from Casey Jensen, “Hey man, you still looking for a polar bear? I just came across a cancellation hunt.” Two hours later, I had a contract on the way to head to Arctic Bay in Nunavut, Canada. I’m a physical therapist and have a pretty flexible schedule. Occasionally, it allows me the opportunity to pick up a cancellation hunt at a discount. Huntin’ Fool has hooked me up with some great outfitters and most know to try me if something good shows up on short notice.

My polar bear hunt was going to be with Canadian North Outfitters (CNO). I only had three weeks to get my gear bought and organized for the Arctic temperatures. CNO supplied me with a parka and -100 degree boots. Believe me, I needed them.

As are most who bow hunt, I’m passionate about it and I immediately went to work at my local shop to make sure everything was going to work well in those frigid temperatures. I even kept my bow in my deep freeze overnight and shot it in the mornings based on a suggestion from CNO’s bowhunting expert, Tony Mudd.

I landed in Arctic Bay in late April. I was met by Michael and Roger who would both be guiding me across the frozen waters. We got to the hotel and did a final thorough gear check. Once they were satisfied I wouldn’t be sent home a popsicle, they headed out. The next morning came, and they picked me up in a small SUV and drove out over the frozen bay to where they had dogs and snowmobiles waiting. We didn’t waste time sitting out in the cold. We packed up and rolled out.

The first day was active and mostly a travel day. We did spot a bear, but it was not what I was looking for. Day two was a little easier and we didn’t cover as much ground, but we did spot more bears. We saw two sows with cubs as well as a small boar. Day three was a wash as we were completely snowed in, not by deep snow, but visibility was 150 feet. There was very little chance we would drive up on a polar bear that close, so we stayed put. Day four took us all the way to the end of the bay, and we started moving back north. Again, we saw bears, but I had my heart set on a respectable boar. The guides were understanding and very confident we would find one before day 10.

The fifth day led us to a spot where another hunter had seen a big bear the previous day. We scoured the area for the first part of the day without any luck. Right after lunch, we spotted a boar chasing a sow across the ice. After a closer inspection, the elder let me know it was a good bear. He told me it was between 8'6" and 9'. I didn’t hesitate and said, “Let’s roll!” The excitement really started, and Michael got his dog team ready. The thought of stalking up on this bear with the dogs working and being out on the bay like that still feels like a dream. How many times had I imagined this scenario?

Michael turned the dogs loose, and the bear backed down into a small sinkhole in the ice. As the dogs tried to keep him distracted, he let out a roar. The dogs all backed up as he fake charged at them. I got up just under 30 yards and took a shot with my Bowtech. I’d stripped off my parka but never felt the cold with all the adrenaline pulsing through me. The arrow hit true, and he spun in a few circles. He tried to crawl out of the depression but was weakening fast. Another arrow from 40 yards and he collapsed.

I’m working my way through a goal of hunting all of the North American big game animals. I’ve always been grateful for any animal I’ve taken or not taken on a hunt. I hunt for the challenge and the love of adventure and the outdoors. It’s hard to explain the feeling I had after this hunt, though. It seemed more than just gratitude. To watch the Inuit Indians as my guides and how they paid respect to the bear was a very moving experience. I’ve replayed that final day many times in the last month. There’s something very humbling in an experience like that. I’m still flooded by emotions each time I think of it. I have three young boys who act like they like to hunt. I’m hoping they can experience an adventure like this and it’s as spiritual for them as it was for me.

Canadian North Outfitters ran a high-quality hunt. Both Michael and Roger called to make sure I made it home safely. John Sauro, an owner at CNO, called me personally to follow up on the hunt as well. I always appreciate professionalism like that. I let them know I was already starting to save for another trip there with one of my boys. I also wanted to say thanks to my bow guy, Jeremy. He helps me with each hunt.